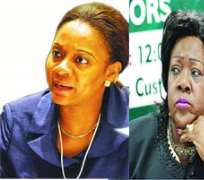 Following the federal high court judgement in favour of ousted Director-General of the Nigerian Stock Exchange (NSE), Professor Ndi Okereke- Onyiuke, shareholders and operators in the capital market are canvassing for the restructuring of the apex capital market regulators, the Securities and Exchange (SEC).

Oteh and Okereke-Onyiuke
The shareholders and operators in their reactions over the judgement in which the court nullified the sack of Onyiuke, and the award of the sum of N500 million as exemplary and aggravated damages, cautioned the SEC to always give fair hearing on issues that affect market operations.

Speaking to Vanguard, Mr. Tunde Adeyemi, Managing Director, DHTL Capital Limited, said, 'In my view, I think it is the same thing I told the stockbrokers then that has happened. Simply, SEC has done too much harm to the system by trying to be a judge in its own court. My view is that: SEC removed the former D-G without any hearing, which is irrational and reckless, especially looking at the state of the market and the contribution of the former D-G to the growth of the capital market, even though she is not perfect.

No administrative panel was set up to indict the former D-G and till now no allegation has been said regarding her till now. I think SEC has been doing this action of 'No Fair Hearing' on all matters regarding the operators for a while and that has been the major problem of the market till date.

'I think looking at the former D-G's track record, she deserves some respect from the SEC and an opportunity to be allowed to resign or retire in peace would have saved the system of this mess.

'Anyway, I think this judgment will allow the governmnnt to restructure SEC and put the right people in this most important institution or else, the immediate market recovery will elude the system.'

Mr. Johnson Chukwu, Managing Director/CEO, Cowry Asset Management Limited in his reaction said: 'Although I am yet to get the full text of the judgment, I believe that it must have been premised on failure of the supervising agency (SEC) to follow due process in the removal of Onyiuke as the Director-General of the Nigerian Stock Exchange. I believe that this judgment can be likened to the decision in Bernard Longe's case against First Bank Plc, where the crux of the matter was not whether the Board of Directors had the power to remove the Managing Director but that due process was not followed in exercising that power.

Moreover, the judgment was not to reinstate Onyiuke but to compensate her for wrongful dismissal. This, I believe, is in line with the maxim that you cannot force a willing employee on an unwilling employer. The lesson for corporate organisations in Nigeria and the regulatory agencies is to always follow due process in the exercise of their power and authority.

Mr. Oluseye Adetunmbi, Chief Responsibility Officer, Value Investing Limited in his own reaction said, ' It is not over until it is over. Since there is room for appeal, it may be explored if the applicable party is interested.'

Mr. Boniface Okezie, Chairman of the Progressive Shareholders Association of Nigeria (PSAN), said that the court judgment has 'really vindicated her (Mrs. Okereke-Onyiuke) and proven that SEC's action was illegal.'

Okezie said the judge ruled in her favour because the SEC did not follow due process before taking action, adding that 'she was not given any fair hearing.'

According to him, ' It is good news that will serve as a lesson to others. Our judges are beginning to assume their responsibilities in delivering quality judgement. Our Association before now has condemned the unlawful sack of Onyiuke who has taken the market to a lofty height. Oteh should have suspended her following SEC's discovery and investigated the matter thoroughly before sacking her. But because she (Ms. Oteh) wanted to show she has power, SEC went ahead to remove her without fair hearing.

It is now left for the government to look at the SEC critically and begin to reorganise it in order to safeguard the market.'

It will be recalled that the former NSE boss challenged her removal as the D-G of the NSE by SEC and demanded N3 billion as damages.

Onyiuke was removed on August 5, 2010 by Arunma Oteh, the Director-General of the SEC over allegations of financial impropriety. The apex market regulator also removed Aliko Dangote as the president of the NSE during the period.

The removal of both Onyiuke and Dangote ushered in an Interim Administrator for the Exchange, Emmanuel Ikazoboh as well as Ballama Manu as Acting President of the NSE. Just after eight months, Mr.Oscar Onyema came in as the substantive Chief Executive Officer of the NSE.

SEC's Appeal:
Lanre Oloyi, SEC's spokesperson in a statement said: ' The Commission would appeal the judgment. The court did not consider the allegations of financial mismanagement levelled against Onyiuke.

'In August 2010, SEC exercised its statutory powers of intervention and took regulatory action to protect the NSE, the interest of the investing public and the Nigerian economy as a whole. The judgment read in court this morning (last Friday) questions procedural aspects of SEC's regulatory action. SEC disagrees and intends immediately to file an appeal against the decision,' the Commission said in a statement on Friday.

The statement noted that 'the judgment makes no comment whatsoever about the serious allegations of misconduct, fraud and breach of trust made against the former Director-General of the NSE, Mrs. Ndi Okereke-Onyiuke, and some of her erstwhile colleagues. It is also important to note that Mrs. Ndi Okereke-Onyiuke has not attempted, in any forum, and in any manner whatsoever, to answer those allegations on their merits.'

Okereke's response
'With this judgement, 'I am still the Director-General of the Nigerian Stock Exchange. I don't care about the money. I don't want to spend money I did not earn. I have not stolen money before, not even when I have just few months to end my years of service meritoriously. It was cruel to think that I can begin to steal money while I am going.

'I don't know how I feel. God has spoken and I am glad that the judgement day has come and gone and I don't know how to explain the development. No matter what they wanted to do to me, God has avenged. I am very happy. I know they may want to challenge the decision because they would want to continue wasting people's money, but I will not be deterred.'