EL RUFAI, NIGERIA AND THEIR FEARS 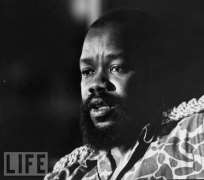 On 16 April, 2011, Nigeria held an election and a section of the country disputed the result of the election by killing the people from the other section. The ethnic cleansing killings followed a familiar pattern as it has been since the inception of independent Nigeria in the beginning of the 1960s to the present time. At the end of six days of the mayhem, as has been practiced by Nigeria and its Islamic population, 3000 Igbo/Biafrans and other Southern Christians lay dead. Private homes and businesses of these people were looted and burned, their places of worship, 84 churches were burned and 65,000 of them were displaced. After the killings and destructions, Biafra was rightly invoked by Nigeria’s president-elect and Mallam Nasir El Rufai became jittery and afraid and called the President “irresponsible”.

In July, 1966 there was a military coup d’état in Nigeria. A group of soldiers killed and took over government from Thomas Aguiyi Ironsi who was from Igbo/Biafra in the Southeast. This group did not stop at just taking over power they embarked on ethnically cleansing the army, police, navy, air force, customs and the civilian populations of Nigeria of all people of Southeast ethnic origin. So by 30May, 1967 a total of 30,000 Igbo/Biafrans and other Christians of Southeastern descent lay dead across the entire landscape of Northern and Western Nigeria. They were brutally murdered by Nigeria’s Yoruba, Hausa, Fulani, Birom, Nupe, Gwari, Tiv, Idoma, Kanuri, etc other ethnic population, and of course also by the Nigerian military forces. More than 1,000,000 of the people were looted and displaced. They went back to their ancestral homeland in the Southeast and believed they would be spared and could begin again. That was not going to be, the Biafra War would happen and over 3,000,000 of them were further massacred by Nigeria.

The reason for the ethnic killings and lootings of the Igbo/Biafrans and the other Southeastern Christians was given in 1966 by the then leader of Nigeria. And Nigerians still hold strongly to that reason today just as they had always done. Nigeria’s leader then said that “the basis for Nigeria’s unity is not there”. And it is based on this fact that there is no basis for Nigeria’s unity that the Muslim North and West of Nigeria wanted then as they still do today, to rid Nigeria of all Igbo/Biafrans and other Southeastern Christians so that they could have a “monolithic” society united in their bond of Islamic practices and sharia. Very well, Biafrans cannot wish for anything better today. They would no more have anything to do with Nigeria and its people.

When in April, 2011 after the result of an election was announced and it was declared that Jonathan, a Southern Christian was the winner over Mohammad Buhari, a Muslim Northerner all Hell was let loose. (It was expected, even El Rufai and Buhari said that much). The Muslims of Northern Nigeria descended on the Igbo/Biafrans and other Southern Christians and had another “great” time as usual in killing them. (These Northern Muslims take great pleasure in spilling the blood of Igbo/Biafrans and other Southern Christians. Americans and people from other parts of the world who are reading this can get the better picture when they can relate it with America’s horrific 9/11 of 2001 or India’s 27 November, 2008 terror attacks in Mumbai. Can anyone ever justify these attacks on civilian populace? Let the reader be the judge). After the killings, the president-elect issued a statement. In his speech Jonathan stated the obvious and said that the killings and violence that ensued after his election followed the same pattern that led to 30 May, 1967 declaration of Biafra’s Independence by Igbo/Biafrans and other Southeastern Christians. Jonathan may not as well have said that, it no longer made any difference because on the same month of May 2011 after this last killing the New Independent and Sovereign state of Biafra came into being just like on the 30th of May, 1967.

In the words of El Rufai, Jonathan raised the specter of Biafra after the killings and to El Rufai the president was irresponsible. The man El Rufai and his people do not understand the meaning of the sanctity of human life. To them any people from different ethnic/religious group should not exist around them. In their belief such people only deserve to be killed, so why should anyone remind them of a name like Biafra that represents freedom and clear distance from the reach of their sword of jihad. We may need to remind El Rufai, Obasanjo and the rest people like them who live in constant fear of Biafra that they need not continue to be afraid at the mention of Biafra because Biafra stands for Freedom and Self-Determination, hope, refuge and comfort to all people everywhere who are oppressed, persecuted and killed for being different, believing and worshipping differently.

Right now, and as it has always been and will continue to be, there is no basis for Nigeria’s unity. The idea of one-Nigeria was, is and will for all time remain a fraud. The Igbo/Biafrans and the other Southeastern Christians have nothing in common with the rest of Nigerians and there will never be any basis for them to remain in unity with the rest of the people who have continually killed and looted them for no other reason than their believing, worshipping and speaking differently. The rest of Nigerians can have their Nigeria while Biafrans have their Biafra where they are free to believe, worship and express themselves as they would wish without infringing on other people’s liberty neither should anyone continue to trample on their lives and liberties. Biafrans refuse to let this abuse to go on. They choose to be free and reject Nigeria and everything that it represents.

The name of this choice, what Biafrans are doing is called Self-Determination. It is the same thing that is taking place in South Sudan, United Kingdom’s Scotland and Wells, Kosovo and now in Biafra and, there is nothing criminal about it. For the avoidance of any doubt this is one definition of self determination as taken from an online Wikipedia, “Self determination is the principle in international law that nations (such as Igbo/Biafra) have the right to freely choose their sovereignty and international political status with no external compulsion or external interference.” Please check out United Nations Declaration on the Rights of Indigenous Peoples which clearly provides backing for such noble action. You can also check out the 1986 Banjul Charter on Human and Peoples’ Rights. All these and more give full legal backing to Biafra’s right to create a homeland for her people, separate and different from Nigeria and everything that people like El Rufai, Obasanjo and all Nigerians represent. The United States had at first shied away from this UN Declaration but they have just recently turned around and completely support states such as Biafra that are taking back their rights and sovereignty. Biafrans have no apology for taking this action because no one should ever apologize for their existence. Nature requires that you only relate with those who treat you with respect and human dignity.

The advice has always been that those who live in glass house should not have a penchant for throwing stones. But the Islamic Northern and Western Nigeria have been too reckless to heed this very logical and simple warning. They have cast rather too many Islamic-beheading-stones against the Igbo/Biafrans and other Southeastern Christians and, this very fragile structure, Nigeria has been so badly fractured beyond repair and it must disintegrate now. But it looks like El Rufai, Obasanjo and the rest of them cannot stand to see the result of their recklessness and total lack of respect for the sanctity of human lives and their zero-tolerance of different views as held by other people. Now, they are afraid, so they shrink and shriek at any mention of Biafra. Too late for them as Biafrans can no longer serve as the cannon fodders that feed their insatiable Islamic appetite for blood and bestiality.