Hello, is that Pastor Tu Face in the house? 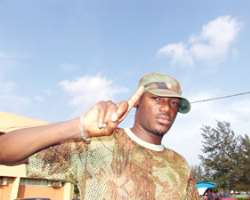 Although his was a very popular face among the co-travellers aboard the South African Airways plane, Innocent Idibia could not avoid having a nap in the course of the flight from Johannesburg to Lagos. Luckily for him, the plane was not tightly filled, to the extent that one or two seats next to him were idle. It thus provided him a space to lay his slender frames.

And who would blame the artiste popularly called Tu Face for that? Star or no star, no air passenger has the prerogative of cooling his or her head off with a slice of sleep. Besides, 'body no be wood', as is casually said. Here was a chap that had, two days earlier, flown into Johannesburg from Australia where he had gone to collect his latest prize, the Best African Act 2008.

Like his colleagues such as Ikechukwu and Faze, he had gone to Jo' burg to attend the Channel O Music Award held in October. But because stardom comes with a price, Tu Face would be flying back to London almost immediately he got to Lagos, meaning that within about four days, he would be in air for only-mathematicians-know hours.

”I thank God, but it has not been easy,” he told our correspondent who had accosted him in the plane as he rose from the 'siesta'. He was generally reflecting on his schedules these days.

Of course, traveling may not be the most demanding aspect of his work as a musician. The real deal is having to perform in different places, especially for a star like him. One thus wonders how and when he relaxes, and how he trains his body and voice for endless shows.

”I don't do much training in the sense I think you may have in mind,” he said. ”I do little exercise. When I am alone I try to open my throat to collect fresh breath. At times, I sing to myself, hear out my voice and so on and so forth.”

If he were not a musician, Tu Face confessed, he would have loved to be a comedian. He actually tried comedy before. But, according to him, he got nervous each time he mounted the stage. The consolation he has now is that he is friendly with many comedians and co-musicians alike. But how does he feel each time the Ali Babas of Nigeria make musicians objects of caustic jokes? For instance, many of the jokes merchants enjoy deriding the artistes when they compare them to foreign musicians. But Tu Face does not lose any sleep over that.

For the comedians, he had a clean bill of health, saying, ”That is just humour. I don't have any problem with that at all. Anybody that does not see the humour in such comparisons is sick within. That is just humour to create a good laugh.”

Tu Face is happy that the music industry is getting rosier. He is still in the process of entrenching his own label, which came on stream not long ago. Like many other stakeholders, pirates scare him. While he, however, welcomes younger talents on board, he is piqued that some of the people jumping onto the scene are merely wasting their time.

”I believe what drive some of theses people is not just talent,” he said. ”Some love music right. But the mistake they make is that without good talent, you can hardly last. That is why at times, they get lured onto the scene. They do one song; play on radio or even Telly. But soon, they fade out as they came.”

His advice for upcoming artistes is that they should be themselves. They should stay focused, be disciplined and try to constantly renew themselves. He also emphasises the need for them to be close to God.

On that portion of the advice, our correspondent shrank a bit. Was that Pastor Tu Face in the house? How close is he to the church, by the way?

”Church is in the heart,” he said.