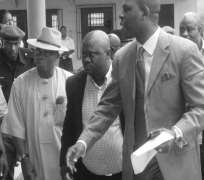 KEY NOTE ADDRESS BY PRINCE TONYE PRINCEWILL THE LEADER OF FORUM OF ORGANISED OPPOSITION POLITICAL PARTIES (FOOPP) IN RIVERS STATE DURING THE OCCASION OF THE INUGURATION OF ITS STATE EXCO ON 26TH JUNE, 2009 AT PORT HARCOURT

PROTOCOL
I am honoured to present this keynote address at this inaugural swearing in of the EXCO of the Forum of Organised Political Parties (FOPP) in Rivers State. Today the 26th of June 2009, we formally make public, the consolidation of an idea first berthed on the 27th October, 2007, when eight political parties (AC, RPN, ADC, CPP, UNDP, ARP, UNPP and ANPP) decided to withdraw their hostilities to PDP and support the Rt. Hon. Rotimi Amaechi led administration. That decision has gradually evolved into what is hailed today as a study in political pragmatism, clearly setting Rivers State apart as a trail blazer in political innovation within this nation's polity.

Although some of us encountered dire challenges and stiff sanctions from our National Leaders and party stakeholders at the time, the resultant stability and progress recorded by this administration so far, has made the pain of the aforementioned challenges nothing compared to the gains of our beloved state. Today we have stood the test of time and it appears our tomorrow will be even better than our today.

I am overwhelmed as I recall, that from the initial eight political parties that took that bold step back in 2007, today we have in our fold 43 accepting to come together under one umbrella to support our cause and vision for the State. This unified body is here today because we chose not to look down on any political party as insignificant or less than relevant, decided that to reach the grassroots better we needed to expand rather than contract and agreed that opposition was not about AC vs PDP but about right versus wrong, differing opinions and a voice for the voiceless.

As we inaugurate its State Exco today it would not be out of place for me to throw light on two separate but defining moments that heralded today's event. The first took place on the 8th of April 2009, when Chairmen of 18 political parties under the auspices of Forum of Opposition political Parties in Rivers State convened a press conference in Port Harcourt announcing through the Forum Leader, Chief Harry Alaye, its decision to adopt me as its Consensus Leader. According to him, the decision to merge with the initial seven political parties under my purview was a well thought out idea, which he believed, would form a formidable alliance capable of moving the state forward. A fortnight later on the 23rd of April 2009, the Organised Opposition Political Parties (OOPP) in Rivers State also addressed a Press Conference toeing the line of FOPP in adopting me as its Leader.

When I was informed of the unanimous decision appointing me to lead this elitist group, I knew at once the enormity of the attendant responsibilities of such a great task and found myself in a state of reflection wondering if indeed “I was ready to lead the transformation of this new political marriage?” The answer to this question is what I hope to demonstrate as I forge ahead one step at a time with this formidable team made up of tried and tested political strategists, the likes of whom we swear in today.

It has indeed been a process marked by extensive, far reaching and wide consultations not just within the state but also outside of it. The legality of the exercise, its practicality, the implications of what we are doing here today and its benefits to the state have been placed under a number of legal, political and strategic microscopes culminating in a resounding thrust to go forward. The initial formation of a 10 man harmonisation Committee led by the DPP Chairman Garshon Benson and a 6 man constitution drafting committee led by Barr Iyke Echie from Emohua under the supervision of Hon Barr Osima Ginah though critical were only tips of the iceberg. At the last count there have been over 62 formal meetings, only 9 of which involved me and many many more informal chats to get us here. From Yola to Lagos and Abuja this journey began and ended here but its path knew no bounds.

Anyone who knows the antecedents of the political playing field in Rivers State will be greatly encouraged by what is happening here today. By the very nature of today's event, hope is being restored to many weary hearts throughout the state, that live in perpetual despair at the seemingly endless cycle of political violence, litigation - a legacy of past leaders. Today we craft a new sense of purpose in a direction which will hopefully lead Rivers State to the point where personal agenda and political differences can be put on the backburner in the interest of the state.

Today we unburden ourselves of the legacy of the sordid political past.

Today we launch into the future with renewed hope to secure a better future for us and for the next generation.

Today we launch a call to service and a movement away from money politics.

Today I reiterate that it is not about His Excellency, neither is it about my humble self. It is rather a collective consensus that we must begin to do things differently for the good of Rivers State, that we will change the course of our destiny. The time old saying - “If you want to keep getting what you are getting, keep doing what you are doing.” comes to mind. We want different results so we must act differently.

Our motto 'Unity in Strength' is the premise that drives this consensus. For the avoidance of doubt, I crave your indulgence as I quickly run through some of our objectives:

(1) To support and strengthen the Unity government in Rivers State.

(2) To foster unity and progress amongst member political parties for the betterment of the good people of Rivers state. (3) To criticize the government of the day constructively as and when necessary.

(4) To support democratic principles and encourage electoral bodies to organize true and proper elections that will reflect the true wishes of the electorate.

(5) To protect member political parties before, during and after elections.

(6) To support Government to encourage active participation of Rivers State indigenes in strategic sectors of the State Economy.

I take this opportunity to commend and congratulate Rt. Hon. Chibuike Rotimi Amaechi who has demonstrated that he is indeed a rare gift to our State. The fact remains that without him what we have done to organize the opposition in the State would not have been possible. As Leader of this Forum, I wish to defer to Rt. Hon. Amaechi as the father of this Forum. His rare tolerance has served to create the conducive and enabling environment for opposition politics to thrive. By engaging us he has engaged many more Rivers people.

This Forum does not change the fact that I remain a major critic of this administration. We will continue to criticize the administration as the need arises and support the government where necessary. I thank all that have made this historical event possible and want to reserve my thanks especially to the Almighty God who has seen us through thus far, May all glory and Honour go to Him.