I am still single because I am yet to find a girl who would marry me........Kalu Ikeagwu 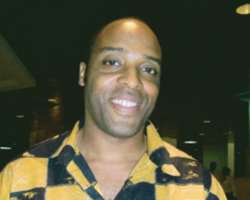 Kalu Ikeagwu is one of the most handsome actors in Nollywood. The fair skinned and formerly clean-shaven, but now bearded, actor not only has the good looks, he knows his onions when it comes to acting.

Many people believe that the actor, who has been linked with some babes in the industry including Alex Okoroji, has been off the scene for a while, but Life and Beat ran into the actor at a nightclub in Lagos recently.

Was he having a nice time? Oh yes, the actor was giving himself a treat with bottles of Gulder and sticks of St Moritz cigarette.

Before you ask, of course, he was carrying a 'handbag'. The chick he came with is not really a known face and she rarely left the actor's side, probably for fear of having him snatched by other daughters of Eve.

Anyway, Life and Beat overheard the actor telling somebody that the lady was 'just a friend.'

“I am 40 but I am still single because I am yet to find a girl who would marry Kalu Ikeagwu, the man, and not Kalu Ikeagwu the actor,” Life and Beat overheard him saying.