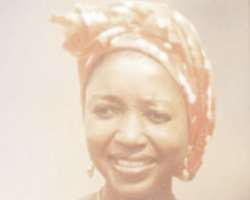 SAN FRANCISCO, May 12, (THEWILL) - Cross River State Governor, Senator Liyel Imoke says he received with a deep sense of sadness and grief the news of the demise of the wife of the Chief Justice of Nigeria, Mrs. Victoria Mimi Katsina-Alu.

On behalf of the Government and people of Cross River State, Senator Imoke said the State mourns her and also share with His Lordship, Justice Katsina-Alu during this moment of grief which came though very unfortunate circumstance

The Governor said Cross Riverians are deeply touched considering the exemplary life she lead and the care, love and devotion with which she leaded to family matters.

Cross River State he noted is not unmindful of the support she gave Justice Alu in his legal career especially since he assumed office as the Chief Justice of Nigeria.

He urged Justice Alu to take solace and draw strength from the loving and exciting time he shared with her while alive.

According to Governor Imoke, “Victoria helped you weather the storm of public and private life.” She will no doubt expect you to demonstrate the strength of character that distinguished you in your career at the bench in this trying moment of grief.”