STUDENTS MOURN AS NUC CLAMPS DOWN ON ILLEGAL VARSITIES 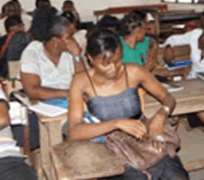 All they earnestly desired was good education that would place them on the same pedestal with their educated peers as well as set them on the path to self-actualization.

To achieve this dream, they invested so much to secure admission into tertiary institutions that offer distance learning in Lagos. But their dreams have since turned to sorrow following a clampdown on six universities by the National Universities Commission (NUC). The institutions were said to be operating without federal government approval.

The NUC committee led by the chairman, Professor Ebenezer Adebowale, Legal Adviser, Mr. Moses Awe and a member, Mr. Oguguwa stormed the illegal universities when the students were either receiving lectures or preparing for examinations. The schools were then shut down after the students were briefed about the mission of the NUC team.

For these students, tears have not stopped flowing, neither have they come to grasp with the reality of their predicament. Thousands of them have been seeking to know why their schools were closed, but members of the schools' management have since disappeared into thin air, abandoning the students to their fate.

Some of the illegal universities shut down included University of Education, Winneba, Ghana operating at Itire Primary School, Lagos, with a population of over 1,000 students; University of Ibadan (UI) and Obafemi Awolowo University (OAU), Ile-Ife, both offering degree and MBA programmes with over 800 students; Charles Lorie French Academy, Festac and Ahmadu Bello University, Zaira, study centres. Also shut down were Olabisi Onabanjo University (OOU), Ago-Iwoye, Ogun State and Ladoke Akintola University of Technology (LAUTECH), Ogbomoso, both of which operated from Topmost International Comprehensive Secondary School, Maryland. Unqualified lecturers, according to the NUC, were tutoring the two schools, which had over 2,300 degree and MBA students.

The body has however, advised the affected students to either enrol at the National Open University of Nigeria (NOUN), University of Lagos Distance learning programme or liaise with the universities' management on how to gain admission into the main campus of the shut schools, if they are truly genuine. Reacting to the closure, some of the students lamented that they had spent almost all they had to finance themselves in the universities. Those who have almost concluded their education in the illegal universities disclosed that they had been paying between N60, 000 to N80, 000 per session as school fees.

Tony, an automobile trader is among the affected students. The 32-year-old, who said he paid heavily to secure admission into one of the illegal universities, told Daily Sun that he decided to enhance his status with the degree programme he was undergoing. He said NUC owed them explanations on the closure. 'I needed the university certificate to enhance my status among my friends and in the society. I am a very successful businessman with spare parts shops, a fleet of cars and two houses to show for my success. The only thing lacking was education. I needed the degree because education is important to me,' Tony said.

Also lamenting her fate was Rose, a banker with one of the new generation banks on Lagos Island. She was among the MBA students receiving lectures when the NUC team stormed Charles Lorie French Academy, Festac. She disclosed that her dream to enhance her job status with the MBA certificate had been dashed.

Speaking on why they decided to clamp down on the illegal universities, Professor Adebowale said the schools were operating without certificates of approval, thereby destroying the chances of giving the students genuine, quality education. He noted that the committee demanded for the certificates of approval from the university workers but regretted that no document was ever provided.

'The University of Education, Winneba, Ghana is not known to the NUC. It will remain closed until we are showed the NUC approval. The students can't get employed with certificates from these schools. I wonder why the owners and lecturers take to their feet each time they see us. All we want is for them to provide us with their approval,' he said. Speaking on the experience of the committee during the clampdown, Adebowale said the coordinator of Charles Lorie French Academy, Festac, attempted to deceive the committee by showing them a poster bearing the name of the Institute of Security Management Operations, and explaining that they only teach security management courses.

His words: 'When we insisted on seeing things for ourselves, we discovered that the school was running Ahmadu Bello University (ABU) and OAU programmes, including MBA programmes. The committee met four lectures in progress and discovered that the lecturers, particularly those lecturing the MBA classes were not qualified. One of them actually abandoned his class when he became aware of the committee's presence.'

Adebowale who is also the Pro Chancellor of Bowen University, Iwo, Osun State, disclosed that the biggest discovery of the NUC committee was made at the Chartered Institute of Administration, Ojo, where the committee was told that the school only prepared students for Institute of Chartered Accountants of Nigeria (ICAN) and other professional examinations. 'But an eagle eyed member of the committee spotted student results sheet pasted on the walls with the logo of Evan Enwerem University, Owerri, Imo state.'

He said immediately after the discovery, the operator absconded, leaving the students to their fate. The lecturers caught teaching in the school, he noted, claimed ignorance of the school's status.

Adebowale, however, advised students to always crosscheck from the commission's website before applying for admissions into any university, stressing that most Vice Chancellors are not aware that the name of their institutions are being used to operate study centres outside the main campus.      Public Relations Officer of Obafemi Awolowo University (OAU), Ile Ife, Mr. Biodun Olanrewaju, while speaking with Daily Sun, said operators of the illegal study centres are using the name of the institutions to deceive students. 'We don't have any satellite campus in Lagos. People should beware,' he warned.