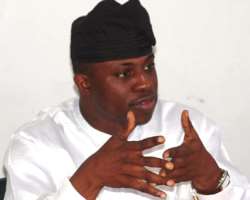 ABUJA, May 11, (THEWILL) - This may not be the best of times for the outgoing Speaker of the House of Representatives, Hon. Dimeji Bankole, as he has been summoned to appear before the House to answer questions on allegations of financial misappropriation and mismanagement leveled against him by a member of the House, Hon. Dino Melaye.

This is even as the lower chambers, which is said to be bankrupt and indebted to banks to the tune of about N10 billion today had a rowdy session, as a result of protest from members.

Bankole who lost in the April general elections in his bid to return to the House narrowly escaped been suspended from the House as his accuser had prayed the chambers to suspend him to pave way for an independent investigation into the allegations of corruption preferred against him.

Trouble began at the resumed plenary of the House today when the chambers was locked against members. It took the intervention of the Deputy Speaker, Hon. Usman Bayero Nafada before the doors of the chambers were drawn open for lawmakers to gain access.

But as soon as the plenary commenced, Hon. Dino Melaye, leader of the Progressive Minded Lawmakers (PLM) who were suspended last year raised a point of order citing Order 5 of the House Standing Rules, in which he alleged that there was leadership failure in the House.

Melaye complained that their (the 11 members who were suspended) emoluments, which had been approved by the whole house were yet to be paid, one week after the resolution arguing that this was in violation of Order 4 (2) 1-3 of the House Standing Rules.

He also carpeted the leadership of abruptly adjourning the House last week without due process thereby violating the rules of the House.

Arguing his case further, Melaye accused the speaker, Dimeji Bankole of financial impropriety, which has resulted in their inability to pay up their accumulated salaries and allowances.

“We discovered that while we were on suspension, cheques were raised in our names and kept in the vault. But by November, the cheques started disappearing and we have learnt reliably that the monies have been spent.

“I was told by UBA, which is the official bank of this House that the House is indebted to it and our money has been released by the CBN but since they are being owed, the bank is withholding the money.

“I’ve also discovered through my personal investigation that the Speaker approved that money be borrowed in our names (suspended members). Since there was no resolution by this House or any meeting between Speaker and principal officers for such an action, I’m pleading with this House that in the name of my children school fees and my beautiful wife, my salary be paid,” Melaye stated.

He accused the leadership of also locking up the chambers against members and demanded that Speaker Bankole be suspended and a committee set up to look into the finances of the House especially its indebtedness.

He said, “I therefore move that the Rt. Hon. Dimeji Bankole be suspended until the report of this investigation be concluded.”

However, the Deputy Speaker, Usman Nafada who presided over the session apologized to his colleagues for ‘unceremoniously’ adjourning the House last week as well as the incidence of locking members out of the chambers today. He also promised that the money due to the Progressive 11 will be paid immediately.

While reacting to Melaye’s motion, Chairman of the House Committee on Police Affairs, Hon. Abdul Ningi argued that the allegations raised were weighty and there was every need to look into it. He however submitted that “the issues raised can only be answered by the Speaker, so what I would say is to ask the Deputy Speaker to invite the speaker to come and respond to these allegations tomorrow (Thursday)”.

Also supporting the submission of Ninigi, Hon. Friday Itulah (PDP, Edo) said the Speaker was absent in the chambers and it will amount to “shaving his hair in his absence” hence he should be given benefit of doubt to come and defend himself.

Consequently, Melaye withdrew the motion to be represented on Thursday by 10 am when the Speaker is expected to be in the chambers.