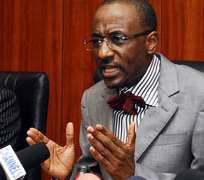 Government has said the depletion in reserves is largely due to spending to support the naira at the Central Bank's bi-weekly foreign exchange auctions, although Governor of the apex bank, Sanusi Lamido Sanusi, said, on Thursday, in Cape Town in South Africa that foreign exchange demand was falling back to normal levels, now that elections are over.

Sanusi said he may reduce interest-rate to help encourage lending in the country, as demand for foreign currency eases, which would reduce pressure on the naira.'We frontloaded a lot of the increase that people thought we'd do gradually over the year' when the central bank raised its benchmark interest rate by 1 percentage point to 7.5 percent on March 22,' he said.

The CBN, he said is aiming to bring inflation down below 10 percent. Rising energy and food costs this year pushed the inflation rate to an annual 12.8 percent in March from 11.1 percent a month earlier, the statistics office said on April 18. While the central bank is aware of rising price pressures it also wants to avoid undermining stability in financial markets after using $4 billion to bail out banks in 2009.

'We did a massive increase relatively at the last Monetary Policy Committee,' Sanusi said. 'Part of what we factored in was the expectation of increased spending during elections, the increased cost of energy, the possible reduction in fuel subsidies' and other issues. Commenting on currency pressure, he stated that monetary authorities will face a 'very tough year' with energy prices surging, Nigeria's central bank is 'not only an inflation-targeting central bank.

Moreover, inflation pressure may ease as demand for foreign currency at the CBN's bi-weekly auctions declines following last month's elections, reducing pressure on the naira. The central bank sold $350 million last Wednesday's auction, compared with demand of $383.3 million. That's down from average demand of $453.36 at the March auctions.'With everything calming down we expect pressure we've seen on the naira and demand at the auctions coming down,' Sanusi said.