NEW ACTOR RAHIM STARS IN MASTERS OF THE GAME 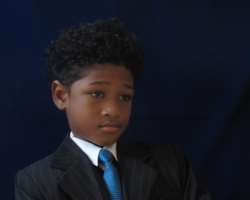 Rahim Banda!!! Does the name ring any bell? Well, Rahim is a child actor whose immaculate acting skills is steadily placing him on the map of the best actors in Ghana.

He started acting at the age of nine and has had the opportunity to star in over three movies one from the stables of Venus Films and the other two from the camp of Bandex Films which happens to be his father's production. His latest work is Masters of the Game which was released onto the market last week.

In a chat with his father, Mr. Ahmed Banda, he told us that he discovered Rahim at the time he was also praying that, one of his children should follow his footsteps. So he featured him in his first movie called “Millions”. He did not dialogue in that movie but played the role given him to perfection which Venus films decided to employ his services.

But why did Bandex get to know that among his three children Rahim can act better? His answer to this question is that, anytime they are at home watching any movie, Rahim mimes it to perfection. “I can't waste millions on him and say I am trying him because you can't try people in movie making. You spend a lot to come out with a good product so there is nothing like trials” he said.

Bandex also hinted that for now acting is Rahim's hobby but believes he may take it as his future career because he is doing it well. “But who knows? If his mind changes for certain reasons when he grows, I still have to respect his opinion” he added.

Rahim's Best friend is Abeiku Santana's son Benjamin Aggrey who both attend Glow Lamp School (Accra) and the good news is that very soon they will both be seen in the same movie.

Rahim Banda who is called Damien in Masters of the Game, played a computer wizard who is being used by an internet fraud person (John Dumelo) to defraud people up to 5Million Dollars. The story takes a twist when the fraud (John) decides to cheat him after the money had landed. Juliet Ibrahim plays his mother and Kalsoume Sinare is his grandmother.

Bandex would like to use this opportunity to apologize to all movie fans after Abeiku Santana said on air that the movie will be premiered on Friday which prompted people to rush to the silver bird cinema on Friday for tickets. He also said that the premiere could not come off because of the timing of the release of the movie but he is now urging all movie fans to go for a copy of the movie this week. Bandex is married to a beautiful Thailand woman called Wan who is hardly seen in Ghana.