Youth Corpers Boo Lying DG: Says 'We Want to Go Back Home, to Our Parents' 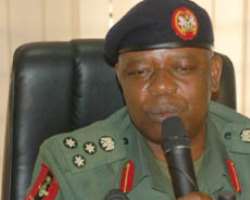 It began with the April 8 th bomb blast in Suleija , Niger state, in which three youth corpers were killed. Confirming the death of the corp members, Babangida Aliyu, governor of Niger state, said,

'It is indeed most unfortunate that the Friday Bomb explosion in Suleija claimed the lives of 11 people, including three (3) corps members on ad-hoc duties with INEC, who had gone to verify their postings for the National Assembly Election, and left 30 people injured'.

While  the governor offered condolences to the families of the people who lost their lives in the bomb blast, particularly the young NYSC members who were on essential national service, the director general of NYSC, Brigadier-General Mahanazu Tsiga, went on national television, to inform the nation that no member of the NYSC died in the Suleija bomb blast just hours before the National Assembly election.

Rather than demand that government provide adequate security for the NYSC members, Gen.Tsiga, told a bold face lie and urged the youth corpers to go ahead and partake in the elections. Since the outcome of the presidential elections, many youth corpers have either been maimed or killed by thugs loyal to politicians, who claim to be protesting the election of Goodluck Jonathan.

Four youth corpers were killed in Bauchi and twenty others are still missing.

Gen. Tsiga, who denied the Suleija killings, is now singing a new tune. While addressing 600 youth corpers in Bauchi, he labeled the attack on the NYSC members, 'barbaric, criminal and a wanton act which must be condemned.'

But it appears the falcon can no longer hear the falconer, as youth corpers booed Brigadier-General Mahanazu Tsiga, yesterday in Bauchi. They continuously interrupted his speech with shouts of 'we want to go home; we want to go back to our parents'

Consequently, He offered to 'organise a convoy of vehicles that will take them to the nearest safe place' to their homes so that they will be reunited with your parents'.

In a related development, the House of Assembly and Gubernatorial elections in Jigawa state may be disrupted, due to lack of ad-hoc staff as some members of the National Youth Service Corps (NYSC) have deserted their primary assignments.

Huhuonline.com understands that NYSC members serving in Hadejia Local Council had sent a Save Our Souls (SOS) message to the NYSC Director in the state following threats to their lives during post- election violence in the area last Monday.

Consequently, the state NYSC's Director, Mr. Baba Ahmed, has withdrawn the 350 corps members from the area due to insecurity.

In the words of Mr.Ahmed, the corps members were withdrawn from their places of primary assignments because of threats to their lives by hoodlums in the area.

He stated: 'They called me and the director-general, asking us to take them from Hadejia because their lives were not secured.

'They also reported to us that the irate youths stormed the police station threatening them where they were taking refuge. As I am talking to you now, I have brought all the corps members in the area to state capital for their safety.'

He further stated that the NYSC had informed the Independent National Electoral Commission (INEC) that the corps members in Hadejia would not participate in the forthcoming governorship and House of Assembly election.

This 'Lamentation' is written by a friend of Late Obinna Okpokiri, 27 year old NYSC member who was gruesomely slaughtered in Bauchi State by irate supporters of Gen. Muhammadu Buhari and CPC murder squad. Effervescent Obinna could have been Buhari's son.

'I did not know Obinna directly but we had been mutual friends here in London . Until recently Obinna was here in the UK , at his family expense, to pick up a post graduate qualification. Obi, as I will call him for the rest of this write up, like every young man had dreams and hopes and one of such was to go back and complete the mandatory NYSC. As a result he packed his bags, paid his way back to Nigeria to serve his fatherland in Bauchi where he was posted to do his National Youth Service .

'As you might have guessed by now Obi is one of the Youth Corpers, reported glibly by the media, killed in Bauchi in the last few days. I don't know if it is because it has happened so many times or what, but the media in Nigeria have become very blasÃ© about such killings and no longer view such as worthy of further coverage. Obi was a person, he had a life, he had a family that loved and sacrificed for him.

'Obi as you can see from his picture was a good looking young man full of life. According to friends, Obi had run to the corpers lodge to seek refuge and was worried enough to contemplate running to the barracks. But before he or any of the other corpers in the lodge could actualize this; death arrived in the form of a CPC murder squad.

'The terror Obi and the rest must have felt can only be best imagined. They were forced out and beaten up and not quite done, the baying crowd of CPC fanatics slaughtered them and set their bodies alight. It is not the kind of death you will wish on your enemy. Let no one try and palm this off on the usual suspects; the Almajiris. Yes there must have been street urchins amongst the killer squad but these were CPC and Buhari loyalists who were out to sort out 'the opponents' of their leader. It did not matter to them that these young people were on a National service, as far as they were concerned, if they were not one of them, then they must be the enemy.

'Just like we have seen in Nigeria before, the Kenyan government sacrificed justice at the altar of political expediency. The Kenyan Government made feeble attempts to bring to trail the perpetuators without much success and the International Criminal Court (ICC) at The Hague was forced to step in. Charges have now been filed against 6 politicians, ex head of Police, a radio DJ and Government ministers for inciting the violence.

'The killing of Obi in Bauchi won't be the first time people have run amok in the North. Far more people have been killed in Plateau state alone than in Kenya . People are killed at the drop of a hat in the North and Middle Belt and the Government appears helpless. We must now call on the ICC to intervene and try and break this cycle of the mindless slaughter of the innocent people in the North. The facts are all there, just as in Kenya ; people were incited and primed to wreak maximum havoc in the event of results not favoring them. Even after the elections we had the likes of Alhaji Buba Galadima of the CPC still going on BBC Hausa service to spew hate.

'We need to tell the government that there is no more room under the carpet. The blood of Obi (and others) is calling for justice. It would be most disappointing if appeasement rather that justice is pursued by the government, killers must be brought to book and not rewarded. If the Government feels this is beyond them, they should then allow for the ICC to step in.'

The question that now provokes the mind is 'Will the Nigerian government sacrifice justice at the altar of political expediency?'

The State Police 20 others are missing.