FOR THE ATTENTION OF GENERAL BUHARI 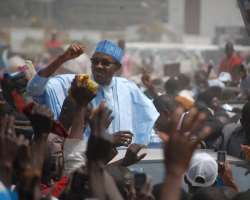 Leadership is what will make Nigeria, it is also what will break it; leadership failure is precisely what is responsible for the crisis that the country is now witnessing after a Presidential election that was adjudged successful by local and international observers and which has received high praise from the United States, Germany, France, Britain, Cote D’Ivoire (!) and France. Since April 16, there has been an outbreak of violence in the Northern parts of the country, with 59 persons dead, thousands injured, many churches, homes and mosques destroyed. It is leadership that can save the country at this very moment, and prevent the fulfillment of the apocalyptic prediction that the present electoral process will result in an implosion of the country. And one man on whom history beckons to play the role of statesman and sportsman, is General Muhammadu Buhari, the Presidential candidate of the Congress for Progressive Change (CPC), former Nigerian Head of State and three-time Presidential candidate since 1999.


Buhari’s CPC came second in the Presidential election of April 16, with 25% of the votes in 16 states (all in the North), and a total of 12.2 million votes out of a total valid votes cast of 39. 5 million. But since the announcement of the results which recognized incumbent President Goodluck Jonathan as the winner of the election with 25% of the total valid votes cast in 31 states and 22. 4 million votes, Buhari’s supporters in the Northern states have been on rampage. Mostly young, poor and unemployed, they are united by the anger that a Southern Christian, an unbeliever in their reckoning, and a product/promoter of Western education is now president-elect.


A geographical picture of the voting pattern in the Presidential election has indicated how that election threw up primordial ethnic, religious and identity questions, the same questions that have been responsible for the inability to create a truly united nation out of Nigeria. Buhari got sectarian votes in 16 Northern states: they voted for him because he is Muslim and Fulani, Jonathan received high votes in the South South, the South East, and the South West and captured the Christian votes plus PDP votes in the North, an indication that his Southerner kinsmen were not willing to forsake him either. Nuhu Ribadu who got 25% of the votes in four Yoruba states did so because he was candidate of a largely Yoruba party. If anything, Jonathan’s victory would seem to prove the point suggested in Section 134 of the Nigerian Constitution to the effect that whoever wants to be President of the country must receive the people’s votes across the country. Buhari failed that test.


Still, General Muhammadu Buhari and his CPC have rejected the results of the April 16 Presidential election. The only other party which is protesting loudly is the FRESH Party led by Pastor Okotie. Okotie’s party scored 34, 331 votes and did not win the required 25% in any state of the Federation. The pastor wants the results of the election to be rejected and an interim government instituted to review the “entire democratic process.” The ACN also refused to sign the results sheets of the Presidential election, but that party’s protest has been half-hearted. It is Buhari’s CPC that has literally been on the offensive. There is no iota of doubt whatsoever that the angry youths who have made a section of the country ungovernable believe that they are acting on behalf of the CPC. They have been chanting: “mu ke so, ba muso hanni” (It is Buhari we want, we don’t want an unbeliever”). General Buhari has been quoted in the media saying that he deplores the violence, he has also spoken on BBC Hausa service, and he has issued two statements in English language to that effect. General Buhari has to do much more than that. His responses to the electoral process and his party’s have been at best contradictory and mischievous.


It will be recalled that in the first week of March 2011, General Buhari advised his supporters to “lynch” anybody who tries to rig the April polls. In his words: “you should never leave polling centres until votes are counted and the winner declared and you should lynch anybody that tries to tinker with the votes.” Subsequently, with his supporters having been so incited, General Buhari disclosed that he did not intend to go to court as a person, but that his party could do so, in the event of his not winning the election. In the same month of March 2011, Buhari’s running mate, Pastor Tunde Bakare also allegedly declared that there would be a “wild wild North” if the elections were rigged. Buhari and Bakare were strongly criticized for this, with pointed insinuations by a group called “Coalition for Transparency and Integrity” that the CPC duo did not have the right temperament for the job that they sought. On April 16, General Buhari after voting complained about unusual aircraft movement and the distribution of ballot papers that had already been thumb-printed: “Buhari said that it was the responsibility of young people as major stakeholders to ensure that the elections were free and fair. If they allow the ruling party to mess them up, it is they who will suffer for the next 40 years.” (The Punch, April 17, at page 14). There has been a lot of lynching in the North since then! Today, we also have on our hands, a “wild wild North”. So, what exactly does General Buhari want? And what should he do?


I think he should place national interest above personal ambition. If indeed he does not believe in the violence that has erupted in the North, he needs to go on radio, and on television and advise his supporters to stop fighting now and to allow the next elections on April 26 to hold peacefully. He must say so pointedly, and unequivocally. This is a message he cannot afford to bury in the midst of complaints about electoral malpractices. And he must convey that message in his own voice and repeatedly in Hausa and Fulfude, the languages that the rioters are more likely to understand and appreciate. He must in doing this, enlist the support of the same emirs that his supporters are denigrating, and the imams and ulamas. Today being Friday, the sermon in all mosques in the North should be a sermon of peace, the angry youths must be told that there is nothing gained by the CPC, the North or the “believers” through the slaughtering of youth corps members and other innocent Nigerians. General Buhari is obviously a folk hero among his supporters. But he must realize that the whole of Nigeria is his heritage having served once as the Head of State of this country. He must not allow himself to end up as the man who would be remembered as the catalyst for a third implosion of the country, a possibility that is signposted by the reference in the President’s speech on the crisis to the Civil war of 1967-70, and June 12, 1993. Today is Good Friday, a day that symbolizes sacrifice. The meaning of Good Friday needs not be explained to either Buhari or Bakare, except that both men are at that same crossroads where they are required to make sacrifice for their country: a sacrifice for unity, peace and stability.


I have read the statement issued by General Buhari titled “Message of Peace and Hope.” There is very little about hope in that message. A speech in which the General writes off the entire election as fraudulent and Jega as insincere, and shows no sign of reconciliation with the opposition says nothing about hope, rather it says everything about the likely dangers ahead. General Buhari should realise that it is precisely this kind of attitude that led to the current crisis in Cote D’Ivoire. In the US Presidential election in 2000, Al Gore could have put his feet down over Florida: the margin between him and George Bush Jnr was so close, but in the end, he conceded defeat so America could move on. In 1979, Chief Obafemi Awolowo, who commanded like Buhari, a cult-like following chose to go to court to contest the results of the Presidential election in part, his disciples insist, in order to prevent violent protest in the South West, and the occurrence of another “wild wild West phenomenon.” It is such statesman-like conduct that is required from Buhari at this moment.


The Congress for Progressive Change has declared its intention to go to court. While it is doing that, the party should also help to educate its angry and violent supporters in the North about the meaning and nature of democracy. In a democracy, the minority may be right and wise, but it may lose to the majority, and once it does so, the majority is allowed to have its way. On April 16, the majority of Nigerians spoke in unison across 31 states and gave victory in the Presidential election to Goodluck Jonathan of the PDP. It is only the tribunal or the courts that can upturn that result, not the mob, relying on self-help. Clearly, voter education remains a problem in our emerging democracy. The CPC did not help matters by arguing that it approached INEC and asked that Professor Jega should not go ahead with the announcement of the Presidential election results without addressing the party’s complaints. Didn’t the CPC big men know that no political party has such powers to order the abortion of an electoral process mid-way?


The CPC has every right to go to court. But they should stop telling us that it is the party going to court, not General Buhari. In my view, there is no difference. The CPC is General Buhari’s special purpose vehicle. He set up the party in 2010, after disagreeing with his former colleagues in the ANPP. He deserves credit for building up a new political party into a formidable force in less than ten months. In terms of performance, the CPC in fact did well, capturing 12.2 million votes. It lost the big prize due to its special handicaps: it lacked a strong structure as well as financial resources; it also adopted on a strategy that relied on Northern demographics, and third, the party failed to take advantage of the proposed merger/alliance with the ACN which could have been a game-changer in the Presidential election.


Now weeping uncontrollably before and after the election, the CPC alleges that there were malpractices in the South South and the South East and a total of 23 states across the country. The party alleges that its polling agents were chased away from collation centres and that the Excel software used by INEC was deliberately configured to sabotage the CPC. Ironically, the same CPC had earlier praised the National Assembly elections of April 9 as “free and fair.” The party is talking about malpractices, but it has not said that it won the election or that Jonathan did not win. Even if the elections in the South South and the South East were cancelled, and a re-run ordered, Jonathan will still win in those states. If CPC’s ambition is to defend the credibility of the process, then why is it not protesting the large turn-out of under-age voters in all the states where it won its 25% in the North?