REVELATIONS FROM THE APRIL PRESIDENTIAL POLL 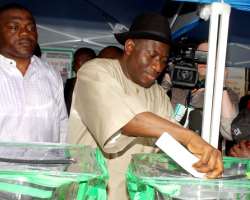 PRESIDENT GOODLUCK EBELE JONATHAN CASTS HIS VOTE IN OTUOKE, BAYELSA STATE DURING THE PRESIDENTIAL ELECTION OF APRIL 16, 2011.
Listen to article

The results from the just concluded presidential elections where two prominent Nigerian citizens, incumbent presidents, Dr. Goodluck Ebele Jonathan and former Head of State, General Muhammad Buhari logged it out have exposed the vanity in the religious perfidy and ethnocentric collocation between the duo and their supporters. Outrightly, it has revealed that all is not well with Nigeria, therefore the urgent need for a tactical solution to fully integrate the citizenry and make its unity in diversity workable. This has remained a herculean task.

Except for those who cannot read between the lines, the election is a clear indication that religion and ethnic attachment, not liberal and national politics still run in the vein of the citizens. It was crystal clear that the north did not like to vote PDP’s President Jonathan while the South did not like to vote CPC’s General Buhari. It was clear that despite all efforts made by Jonathan by going to every state in the north to seek votes, the people saw him as not their own. It was clear that despite all efforts by General Buhari, though he could have not had the financial capacity to carry out aggressive campaigns in the South, he was seen as a northerner – a Hausa man that wants to continue the long dominance of the north on Nigerian political scene.

Apart from the religious and ethnic attachments, there was also a flavour of political jingoism. The trio has often overshadowed any attachment to personality in our politics. From the results, it can be assured that people did not vote on personality or they scarcely combined personality and party. On a serious note, Nigerian politics is still far from advanced democracy. But we shall be there one day.

On the credibility of these two gentle men, they may be ranked equal in certain aspects. Jonathan, as an individual definitely has no problem. I have often said that his past records present him as a man willing and ready to deliver. The fear that many people entertained was connected with the political bloc and politicians around him. People clamour for change. Change can hardly be attained with the old faces who have proffered all solutions for Nigeria but failed. And they still insist on holding to power to continue to proffer the same failed solutions.

One is, thus, flabbergasted that since after the PDP presidential primaries, the positions of the likes of General Ibrahim Babangida and Alhaji Atiku Abubakar on zoning have remained uncertain, unclear or unknown. Does this mean that they have realized that there was no need of clamouring for regional politics in the first place? Another time came when IBB threatened to pull out of PDP if the zoning arrangement of the party was not honoured to the fullest. A question from this: Has the northern politicians who fought for this parochial demand caught up with the reality that the north/south political dichotomy is dangerous to the corporate existence of our dear country?

Buhari is a good man but his alliance with the masses and revelation of his true self during the past electioneering campaigns cannot be jettisoned from being pivotal cogs in his failed political machine. The Nigerian masses are yet too weak to be depended upon for victory in an election. They have proved to be easily induced and frustrated because poverty and ill-health cohabit them. And in Nigerian politics of today, it is difficult to convince the politicians if one shows the intention to change the existing system overnight. A critic once said that a good man cannot rule Nigeria. May be the goodness lies in the individual penchant to effect a quick change. If not, it cannot be argued that some of our leaders of today are good in themselves, maybe different otherwise because of political influence.

In Nigeria, many politicians have perfected their ways to interact with different segments of the society. One finds that Alhaji A cannot be Alhaji A all the time. The same way, Chief B is different in different scenes. This is part of the problems that has caused us the underdevelopment we suffer. Many politicians have proved to be unpredictable. They only pursue personal interest. If not, how can a Lagos-based ACN with a presidential candidate – if he was accepted to be credible by the party – vote massively for another party?

If there is any better than bravo to say to Buhari, many citizens would proclaim it without hesitation. He has shown his credibility in this election and should exit from the political scene – at least he should not ever think of contesting for any political position or he will continue to be deceived. He should accept the stark truth that the masses cannot break the sitting power. Nigerian politics does not need imams and pastors to lead the nation, but to bless the political leaders with prayers. He was led to picking a pastor as a running mate instead of a core politician basically because of the presumed postulation that he was an imam. An imam-pastor ticket it was!

A splendid congratulation to Buhari for shaking the PDP-led government and making it realize that it has to sit up and provide the yearnings of Nigerians, not the party members alone. The Buhari CPC, a toddler party of less than one year, has done so well in the ongoing general elections. But it must accept the fact that, as the Arabs believe, the great is great. PDP has maintained its greatness. CPC cannot claim to have the structure PDP has built across the states in twelve years. So, the party must call its members to order. Even if they lose, there should be no violence. They should take the right path and channel their observations or criticisms to the INEC or Election Tribunals. Let there be no more loss of blood. We must stand up against violence and any civil disturbances.


Although the elections were generally seen as free and fair, the National Chairman and National Secretary of the CPC, Prince Tony Momoh and Buba Galadima (Engr.), have lodged their complaints to the INEC. The letter, copied to the press, international observers and foreign missions in Nigeria, the CPC is seeking cancellation of the elections in Cross River, Akwa Ibom, Rivers, Bayelsa, Delta, Edo; Abia, Anambra, Enugu, Ebonyi, Ekiti, Ogun, Osun, Lagos, Sokoto, Kaduna, Jigawa, Gombe, Yobe, Zamfara, Adamawa, Nasarawa states and the Federal Capital Territory, Abuja.

Congratulations to the PDP, to President Goodluck Jonathan and to his vice, Alhaji Namadi Sambo. They should not be carried away by this victory. Let them be guided by the spirit of “no victor, no vanquished”. Those who did not vote them may not hate them on their individual basis, but only wanted a change in the political direction. If Jonathan/Sambo, for instance, had contested under a party other than PDP, I bet not that they would have swept the north. Even before the election, I have heard many northerners praising the good work of President Jonathan. Now, he is the President-Elect, the President of Nigeria, not PDP or any region.

However, a scrutiny of the electoral processes has depicted what could be described as voting by cohesion. In the South, it was reported that people who wanted to vote for parties other than PDP were forced to reverse their decision. That could be a core reason why PDP cleared the Southeast and SouthSouth. In the north, two things happened. First, it was reported that some people were forced to vote for no party other than CPC. Secondly, it was reported that in some states the unread electorates were led to thumb-print for the umbrella with the intension of voting Buhari. They were told that Buhari belongs to the umbrella which has become a very common emblem.

It may be wrong to blame such electorates. CPC is still a very young party which can be claimed to have been carefully formed to draft the general and his plebiscites to failure. The umbrella represents the PDP and in the last twelve years, it has been voted for massively by the north. So, it needed a properly funded campaign to enlighten the illiterate masses of the north to get acquainted with the CPC logo. And there were all assurances that CPC couldn’t have had such funds to do a good campaign. Remember that the party opened an account for support. One can be sure that only the masses lodged some scanty amounts of money to the Buhari Campaign. But PDP had all the resources to go even abroad for campaigns.

Again, the truth was that the elections exposed a latent war between the two greatest religious groups in Nigeria – Islam and Christianity. The campaigns turned so religious that pastors and imams retired to their niches seeking their God’s intervention for victory. The churches became palpably the campaign grounds for Jonathan’s supporters in the Southern regions. And the results have shown their supremacy. The mosques were used to canvass support for Buhari, apparently an attempt that was not well-knitted like that of the pastors.

Again, the truth from it is the political gimmick that might have moved the pendulum comfortably to the victorious Jonathan. There were implanted pseudo-candidates of the northern extraction to at least share the northern votes. ANPP lost in Kano from where its presidential candidate, Malam Ibrahim Shekarau hails. One may wonder if Malam Shekarau could accept to be used to mar a northern interest. Also, ACN – a core Yoruba party – with its northern presidential candidate, Nuhu Ribadu – an all-time political godson of former president Olusegun Obasanjo – lost woefully, save Lagos State, in the Southwest and made no impact in the Southeast, Southsouth and the north. Now, Obasanjo will laugh wild and longer. He, alone, has defeated all the acclaimed powerful politicians of the north, I need not be betted.

All these point to the fact that President Goodluck Jonathan has an enormous duty to unify this country and make it really one. With the development, political awareness and the level of education spanning the length and breadth of Nigeria, he should discard all religious acrimony and ethnic antagonism and carry everybody along. Nigeria is for Nigerians and only Nigerians can salvage it. Let’s join hands with Goodluck and Sambo to add more values to the lives of the citizens, now that the struggle for presidency – a very tedious one indeed – is over.