BUHARI UNDER FIRE, BARRED FROM NIGER 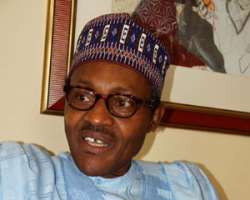 MINNA  - THE Police  in Niger State, yesterday, barred the presidential candidate of the CPC, General Muhammadu Buhari from entering Suleja in Niger State.

Muhammadu Buhari
The Federal Government also, yesterday, held the leadership of CPC responsible for the mayhem amid fears by parents whose children and wards are involved in the NYSC scheme in the North. General Buhari was scheduled to pay condolence visit to victims of the last bomb blast in the area yesterday morning.

Governor Murtala Nyako of Adamawa State, on his part, dismissed claims by Buhari that he would reclaim his mandate saying that Buhari has no mandate to reclaim.

Following the Police ban on him, Buhari accused the Nigeria Police of collaborating with the ruling party in a bid to restrict the democratic space after allegedly denying him, (Buhari) of his mandate.

Accusations irresponsible says Buhari
Buhari also described accusations against him and the leadership of the CPC of fueling the riots by the Federal Government as irresponsible.

The erstwhile Head of State and CPC presidential flag bearer said that the violence that has ravaged the North was directly caused by the stealing of his votes.

He further expressed reservations on the conduct of Prof. Attahiru Jega, the chairman of INEC in drawing back from his promise of manually recounting the votes in the States after the discovery of the reported computer error which he claimed suppressed his votes in Katsina and Kano States.

It was gathered that the letter written by Gen. Buhari to visit Minna was turned down by the police based on security reasons. Buhari was scheduled to visit Suleja to pay a condolence visit to victims and families of those affected by the recent bombing of the INEC office in the town.

The letter disallowing him to pay the condolence visit to Suleja, it was learnt, was passed through the party in the state to Gen. Buhari on Wednesday night.

The letter was said to have been dropped at the party secretariat in Minna, Niger State, Wednesday night unknown to the party officials who had proceeded to Madalla junction yesterday to usher in their presidential candidate to Suleja town.

Chairman of the CPC in the state, Alhaji Shuaibu Umar said: 'I and the governorship candidate Shettima Bako, went to Madalla this morning to receive Gen. Buhari but unknown to us, the police had already dropped a letter in our office not to allow the visit based on what they described as security threat to the state. Even as I am talking to you now, I have not seen the letter.

'All of us the stakeholders are in Madalla and we saw the commissioner of police and some detachment security operatives blocking the road in a bid to disallow him from entering Suleja, we immediately got back to Abuja and the visit was cancelled.'

Gen. Buhari was said to have directed the state party officials led by its chairman to condole families affected by the bomb blasts and promised to visit them after the elections.

When contacted, the Police Public Relation officer, Mr. Richard Oguche, confirmed that CPC had written to the police on the planned visit of the presidential candidate but police replied immediately advising them to cancel the visit because of the security situation in the state as a result of the post election violence.

He said the police only acted based on security reports and would not want to act in contrary in order not to give room for a breakdown of law and order.

Reacting to the ban on him, Buhari speaking through his spokesman Yinka Odumakin said: 'It is clear that the Nigeria Police today is acting in concert with the PDP government to constrict the democratic space in Nigeria to prevent the free movement of citizens of Nigerians who do not belong to the ruling PDP.

The Federal Government, also yesterday, blamed Buhari  for the post election violence in some parts of northern Nigeria.

The Minister of Information and Communications, Mr. Labaran Maku who spoke with journalists in Abuja, faulted Buhari's 'negative mobilization' during the presidential campaigns.

His words: 'What happened after the Presidential election was really unfortunate, we have had some violence in some states of the federation and there have been destruction of lives and property and quite a number of persons have lost their lives, which is indeed unfortunate and regrettable.

Buhari has no structures
He noted, 'For any political analyst the CPC was expected to make an impression but they were not expected to win the Presidential election, when they have not been able to set up permanent structures in majority of the states of the federation.

'The presidential candidate for this party  has previously contested election under ANPP in 2003 and 2007, at  end of every election, he had disputes with his party men, they never really agreed on how to proceed and he later left ANPP to form CPC. Before this election they were not in control of any state and it has no state governor, none of its members were in the National Assembly neither do they have any governor or Councilor.'

'It is very unfortunate that a few Nigerians decided to stain this Presidential election with the blood of the innocent citizen.

He stressed the commitment of the Federal government in ensuring the safety of citizens in all the affected states.

'The Federal Government has taken a position to increase efforts in bringing back peace in the affected states.  Every effort is being made to ensure the security of the next governorship election.

'The federal government is doing everything to bring back the peace of the affected states. Democracy process has come to stay', he said.

Mr. Maku therefore urged all those participating in the electoral process in the land to respect the laws of the land to go to court or tribunal that have been set up for such purposes, saying, 'what has happened so far didn't show respect for the democracy in Nigeria and rule of law and credibility of the country.

'The accusation of culpability was immediately rebuffed by Buhari last night as he described the government's action as irresponsible.

'It is quite irresponsible of those who have stolen the people's mandate whose actions have caused the problems in some parts of the country because they have stolen the votes of the people and are now shifting the blame on the victims,' Odumakin, Buhari's spokesman told Vanguard last night.

'General Buhari as we know in the last few days has been calling for peace while demanding justice. It is the brazen stealing of the votes of the people that has caused these reactions and it is a shame that Prof. Jega who many people have accorded integrity that is now suspect and to open his mouth in brazen display of connivance with those who are manipulating the will of the people.'

Nyako says Buhari has no mandate to reclaim
Fielding questions from State House correspondents yesterday, Governor Nyako who led an Adamawa State delegation to President Jonathan on solidarity/congratulatory visit, said it was only INEC chairman, Professor Attahiru Jega that was competent to announce who has the people's mandate as far as the last presidential election was concerned.

He said: 'Which mandate? The mandate was clearly stated by Jega and the mandate for the presidential election is for Dr Goodluck Ebele Azikwe Mainasara Jonathan. What we did was in the best interest of Nigerians and we are very happy and we wish we had scored higher.