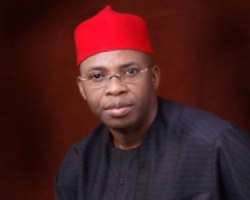 REIGN OF TERROR IN IMO STATE
A CASE OF KIDNAP, ABDUCTION AND TOTURE BY SENATOR IFEANYI ARARAUME AND HIS HIRED GUNMEN.

My name is Chikwem Chijioke Onuoha, the Immediate past Deputy Chief of Staff to the Governor of Imo State and I was the PDP Candidate and Winner of the just concluded House of Representative Election for Okigwe North Federal Constituency, Imo State.

After the elections in all the polling booths in Osu-Owerre Ward II, action shifted to Central School Umunchi, Isiala Mbano LGA which is the Collation Center for my ward. I was at the Collation Center at about 9:22pm to observe the collation process when a contingent of heavily armed men and thugs acting under the instruction of Senator Ifeanyi Araraume, the ACN governorship candidate in Imo State invaded the Collation Center.

To set the records straight, Senator Ifeanyi Ararume is from Osu-Achara Ward, therefore Ararume and his thugs has no business to do in Osu-Owerre Ward II Collation Center all in Isiala Mbano LGA except to actualize their evil plan to harm me.

As the collation of results were going on, the armed men led by one inspector Achibong (a. k. a “EFCC” ) a Police Officer attached to Senator Ifeanyi Araraume alighted from one of the 3 Tinted Hilux Jeep they came with and the armed men started shooting and attacking everybody who was at the venue including the forceful overpowering of my orderly.

Before I could know what was happening, the said Inspector Achibong (A. K. A. EFCC) pointed a loaded gun at my face and shouted “if you move I will shoot you down”. He started hitting me with the butt of his gun and was immediately joined by 20 of his armed thugs who were armed to the tooth. They forcefully dragged me and my elder brother kennedy Onuoha into the Hilux van at gun point and zoomed off.

To my greatest shock, These armed men drove us straight to the country home of Senator Ifeanyi Ararume in Isiebu, Isiala Mbano. At Senator Ifeanyi Ararume’s house to my amazement we where left in the hands of more than a thousand men who were all armed to the tooth. Among them were thugs and hoodlums dressed in police uniform and fully armed.

Few minutes after our arrival Senator Ararume surfaced from his building and approached where I was held captive by his men. On reaching me he began to boast saying;

“You think you can challenge me, now you can see that I am not your mate. Beat him up! Idiot”. I will show you that we own this country. I will kill you and nothing will happen. I will teach you and your and the governor a lesson in Imo State. I fear no one in this country, not even you governor or the President” I control the media houses and security Agencies. You think you can win this election just to embarrass me in my domain, let me see how you will make it today”.

Gentlemen of the Press, I wish to raise an alarm that my life and that of His Excellency the Governor of Imo State Chief Ikedi Ohakim is in danger. Senator Araraume boasted that he has laid plans to harm me and the Governor before 26th April Governorship election. That Imo will explode if He does not win this coming election of 26th.

After saying all these and on his orders, His orderly by name Joel, instructed the thugs to descend on me once again. They dealt me several blows; hit me with the butts of their riffles. They rolled me on the floor and striped me naked. My three Black Berry Phones and Rolex Wristwatch were taken away from me. I have not regained my sight in full even as I am speaking to you now. You can also see the wounds in my legs and all over my body.

When they sensed danger, that rescue might be on the way for me and couldn’t proceed with their plot to kill me. ASP Elom Chika brought Senator Ararume’s Ford Explorer Jeep he had been patrolling the LGA with all through the day and carried me, but rather than take me to the hospital they took me to Isiala Mbano Divisional Police Headquarters in an attempt to lock me up like a common criminal to help cover up their failed plot.

I was finally rescued by a combined team of army and police security operatives sent from Owerri, who stormed the Divisional Police Headquarters in Isiala Mbano LGA and freed me. This was how I survived Senator Ifeanyi Ararume’s plot to kill me.

On our way to Owerri where I was being taken for immediate Medical treatment after the rescue, the team of security operatives led by the Governor’s ADC ran into an arm-bush by the same Senator Ararume’s group at Amaraku Umunkwo boundary in Isiala Mbano LGA. They opened fire immediately they sighted us. They fired many shots at the vehicle carrying me and in the course of the exchange, my Elder Brother Mr. Kelly Onuoha was shot and He sustained serious injury. As I am talking to you my elder brother Mr. Kelly Onuoha is here in Lagos receiving treatment presently as a result of the Gun shot. We had to transfer him out of the Federal Medical Center Owerri because of the treat on his life and the need to give him proper urgent medical attention. I will take all of you to the Hospital here in Lagos for you all to see for yourself. It was by Gods special grace that I am alive today.

It is important that I let you know that during my abduction there was heightened tension in Isiala Mbano. The youths wanted to go on rampage, because I am the BOT Chairman of the National Youth Council of Nigeria (NYCN) Imo State Chapter. I had to speak to them to calm the situation and avert a further breach of the peace.

The INEC Imo State would attest to the fact that the election was peaceful, free and fair in Okigwe North Federal Constituency. There was no single report of Ballot Box snatching. The truth of the matter remains that this incident happened at about 9:22pm. By that time voting had closed in Osu-Owerre Ward II. The Central School Umunchi where the incident took place is the Ward Collation Center. By the time the incident happened results had already been announced in all the polling booths in the Federal Constituency and it was the fact that I was winning that informed the aggression and animousity of Senator Ararume against my person because as ACN Party leader, He has boasted that he will deliver his LGA to his CAN Party and couldn’t stand the shame of the impending defeat my victory was bringing to him on that Saturday NASS Election.

I wish to also commend the Commissioner of Police Imo State for his timely intervention which led to the arrest and detention of some of the culprits. It must be acknowledged here that the courageous intervention of the Imo state Police command led to the Quizzing of Sen. Ararume two days ago(Monday 11th April 2011) and was later granted bail by the Imo State Police Command (His Governorship campaign Director General, Dr. Alex Obi took him on bail).

I am still calling on the Imo State Commissioner of Police and the Nigeria Police Force to immediately prosecute Senator Ifeanyi Araraume to ensure that Justice is done and equally show that no one is above the law. It is in the interest of justice that this man must not be allowed to take laws into his hands and get away with it.

Gentlemen of the Press, I wish to state here that the plot to destabilize Imo state is real and at advanced stage. Political thugs, armed mercenaries and fake police officers have taken over our land with the sole aim of attacking, killing and torturing our people. The whole plan is to install fear in the minds of our people as we get set for the April 26th, 2011 Governorship election in Imo state .I want to equally say here, that with the pains visited on me and other PDP Leaders in my constituency and other parts of the state, our people have resolved to stand up and defend themselves if this type of evil act is allowed to re occur again. The 100% defeat of the ACN Party in Imo state and my Constituency in the just concluded NASS Election is a reflection of the verdict of Imo People to do away with evil men and failed leadership. I urge the police to safeguard Imo, our people, our Governor and myself as the ACN Party has planned to make Imo ungovernable by deploying violence, kidnap and torture before, during and after the April, 26th Election. We all must join hands to save Imo from another reign of terror.

Finally, I call on the President and Commander in Chief of the Armed Forces of the Federal Republic of Nigeria, The National Security Adviser, The Inspector General of Police, The Director General SSS and other security agencies to come to our rescue to disarm this man before he kills everybody in Imo State.