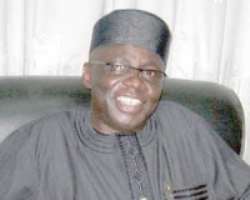 Jonathan faults Buhari on NSC meeting
THE Congress for Progressive Change (CPC) yesterday claimed to have uncovered a plot to remove the Chairman of the Independent National Electoral Commission (INEC), Prof. Attahiru Jega.

The CPC Vice Presidential candidate, Tunde Bakare, who blamed the inability of INEC to conduct the National Assembly election last Saturday on sabotage, said the party was aware of pressure to remove Jega from office.  But he warned that the move would boomerang.

Also, President Goodluck Jonathan has condemned the presidential candidate of the CPC for misrepresenting the purpose of the National Security Council (NSC) meeting held last week over the postponement of the National Assembly elections scheduled for last Saturday.

The CPC was reported to have alleged that last week's meeting of the NSC was aimed at helping the ruling Peoples Democratic Party [PDP] win the 2011 elections.

Bakare who is the running mate to former Military Head of State, Gen. Muhammadu Buhari, spoke yesterday at the formal presentation of the party's manifesto to the people of the South-South in Port Harcourt, Rivers State yesterday.

Bakare lauded the INEC boss for his rare courage and cautioned that it would be preposterous to change the INEC boss in the middle of the game.

He charged the political leadership in the country to take into cognisance the wind of political reform sweeping through the Middle East, and realise that Nigerians were equally yearning for change that must not be denied them.

Bakare who extolled the virtues of Buhari, noted that for several years he had been rigged out of every election, but this time around, Nigerians would resist such moves.

He told the CPC supporters that the party under the leadership of Buhari remained committed to restructuring Nigeria along the lines of true federalism and creating both state and community police to combat crime.

The CPC, according to him would encourage strong federating  units that would control their resources for the development of  their people.

Bakare explained that the party would stop the outrageous salaries and allowances paid to public officers, particularly members of the National Assembly and the Presidency. According to him, no serious nation would develop when 70 per cent of its annual budget is devoted to recurrent expenditure.

The CPC Vice Presidential candidate said the party while in power would construct a 10-lane super highway that would pass through 16 states beginning from the north to the southern part of the country.    He said 20 other states would be linked by a new highway to the superhighway. According to him, there is no way Nigeria can develop without the development of model infrastructure like electricity, water, and the rail system.

Bakare said the CPC would not borrow foreign loans or even deplete the foreign reserve to fund this super highway project, adding that the country had the resources to drive this and other key developmental projects.

The CPC said it would create two million direct jobs and three million indirect jobs within four years if voted into power.

He added that universities of science and technology that specialise in research and development would be established in the six geo-political zones to drive the technological advancement of the country.

In a statement issued by the Director of Media Publicity of the Presidential Campaign Council (PCC) of PDP, Mallam Abba Dabo, the president said that the reaction of the CPC that the PDP was mounting pressure on the Independent National Electoral Commission (INEC) was a confirmation of the campaign of calumny by the opposition.

'The allegation that President Goodluck Jonathan and the PDP are mounting undue pressure on INEC credited to CPC Presidential candidate General Muhammadu Buhari is completely baseless.

'It is a further confirmation of the campaign of calumny and falsehood for which the CPC has come to be associated.  It is indeed baffling and even disturbing that a former Head of State like Buhari, could not see the high security threat posed by the sudden cancellation of the National Assembly elections, and the need for the National Security Council (NSC) to meet and deliberate on crucial security matters arising from the cancellation,' the statement said in part.

Explaining the major reason for the meeting, the president said it was held to address the security challenges that attended the postponement of the elections. 'To cancel a general election midstream in such a vast and populous nation like Nigeria is fraught with high security implications. Nigerians have indeed shown the highest sense of restraint and must be commended for their patriotism.

'Jega has no control over security agencies. The President as the Commander-in-Chief of the Armed Forces and the Chief Security Officer of the nation, has a constitutional duty to ensure that a conducive environment is created for the election.

' His convening of the Security Council meeting is therefore   not only in order, but appropriate. It is therefore unfortunate that the CPC saw this as a partisan act to be exploited for electoral gains,' the statement noted.

He added that since the postponement of the elections, he had done everything to assist INEC to ensure that the electoral process was not compromised and PDP as a party in government was sad over the development. ''Since the postponement of the elections, President Goodluck Jonathan has done everything possible to strengthen INEC's hand and authority to ensure the rescheduled elections are conducted peacefully and transparently.

'The displeasure of our party with the postponement of the election is well known by Nigerians. We believe INEC has been given all it needs by this administration to succeed and should have avoided this unfortunate incident. We are however looking ahead to the new dates. We call on all our supporters, party faithful to again come out en masse as they did last week to cast their votes in a peaceful manner,' he said.