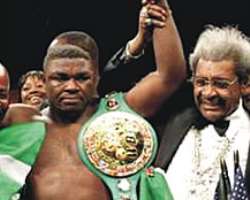 
After a scandalous knockout loss to Wladmir Klitschko in September 2010, Samuel Peter 'The Nigerian Nightmare', 30, returns to the ring today against undefeated Finnish Robert Helenius, 'The Nordic Nightmare' 27, in a World Boxing Organisation (WBO) heavyweight title fight billed for Germany.

Peter, now on the path to re-launch his ailing career after two successive defeats in the hands of the Klitschko brothers – Vitali in 2008 and then Wladmir – will forget the nightmares of his previous outings on the German soil to out-punch Helenius, whose pugilistic record stands at 14 win (nine knockouts).

The former WBO champion goes head to head against the WBO intercontinental titlist at Garry Web Stadium Halle, Nordehein Westfall, Germany, in a fight in which defeat will see what remains of his career further crashing down the cliff.

Peter has not tested action almost seven months since after Wladmir downed him. So he cleaves to his old record of 38 title fights with 34 wins (27 knockouts) and four defeats.

He sealed the contract to fight the Germany-based Helenius after earlier talks for a match-up against Tomasz Adamek and Tye Fields collapsed.

Reports say that Peter, despite being older than his opponent by three years, looks smaller than the massively built younger pugilist, who also has a longer reach just like the Klitschko brothers.

Peter, who is entering the twilight of his career on account of the dent it had taken in the past, with this fight, has a one-off chance to turn things around for himself. He faces the aggression of Helenius, who is hungry to step up in his class and career if only he could defeat Peter.

Last year alone, the Finnish fought thrice, defeating 'Relentless' Lamon Brewster via TKO in the eighth round of their WBO contest. He followed it up with a defeat in August of Gregory Tony and then defended his title against Attila Levin and won by TKO to claim the vacant inter continental title.

Earlier in 2009, the fighter had defeated Nigerian-born Gbenga Olokun despite breaking a bone.