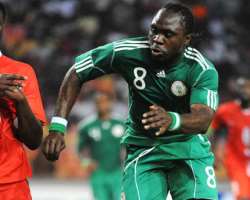 Super Eagles' striker, Peter Utaka, has predicted Nigeria will earn a first-ever victory over Argentina in June. Argentina and Nigeria have clashed twice at full international level with the South Americans winning both games 1-0, at the 2002 and 2010 World Cups.

The Eagles will host Argentina complete with FIFA World Footballer of the year, Lionel Messi, on June 1 in Abuja and Utaka will stick out his neck for a Nigerian win.

'I expect a 2-1 victory in favour of the Super Eagles,' two-goal hero against Ethiopia at the weekend Utaka said.

'We just need to prepare very well and work hard before and during the game to beat them. 'We are not scared of Argentina. We just have to be prepared. They are coming to our home, so we don't need to be scared. We need to be relaxed and enjoy the game. We are the ones who have the fans behind us but they don't. We have the advantage since we are playing at home.'

He added: 'Argentina is a solid team and every player in the team knows what to do. In a match such as this, you don't expect plenty goals like four goals because it is going to be tough and interesting.'

'I am satisfied with my performances for the Super Eagles so far having scored four goals in four matches that I played so far.

'But I could still do better because every player wants to get better and as a striker, you are never satisfied with the goals you have. You just want to continue to score goals.' His target to ensure the Eagles fly over Group B leader, Guinea, to qualify for next year's Africa Cup of Nations in Gabon and Equatorial Guinea.

After three rounds of matches, Guinea has seven points, a point ahead of the Eagles.

'We have great hope that we will win our remaining matches which would be enough to fetch us the Nations Cup ticket irrespective of Guinea's results,' he said. 'The Guineans are coming to Nigeria and if we beat them and we also win our other two away matches, we would be home and dry.'