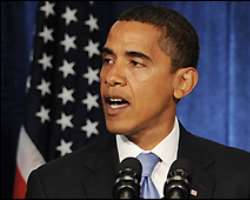 Take a stand on the Niger Delta of Nigeria

I seize this opportunity to congratulate you as the 44th president of the United States of America. Your honesty, respect for others, their views and your multicultural affinity have made possible this feat. Your philosophies or ideologies, guts, dreams for a better, inclusive and equitable America and the world's oppressed and poor have designated you as the beacon of hope. The danger the depletion of the global environment put before us, and your position on tackling this danger has also endeared you to the world, making you the 21st century inspiration. Thank you for your boldness and zeal attempting to bring to earth a new dawn that has been long sought to no avail.

Meanwhile, as the subject matter states, I ask that you please take a firm stand on the travails of the people and environment of the Niger Delta of Nigeria. Human rights, environmental and economic justice for Niger Delta is justice for the world, the fast dying global environment in particular. The region is bleeding, hence dying fast. It therefore request, the boldness, integrity, honesty and consistency of a world leader of your caliber to heal its wounds and bring it back to life.

Importantly, Niger Delta is a region so pertinent to the energy needs of America. America buys more 40 percent of the region's oil, misnamed Nigerian. The reduction of oil (foreign) consumption and search for alternative energy to reduce pressure on, and save the environment were among the manifestoes that charmed me (a human and environmental rights crusader and many others) to your campaign. Oil, I believe, will remain the primary source of energy for another 30 to 40 years. This makes Niger Delta one of the livewires of America because the nation runs mostly on oil-energy.

Notwithstanding, your plans for alternative energy that would reduce cost and save the environment from further degradation, reduce or stamp-out the threat that climate changes and global warming pose is a welcome development, which less oil consumption serves as prerequisite.

Conscious of the fact that you came in a time when America (the world inclusive) is facing numerous challenges, all the positive plans you have to bring back the old glory and make the nation protected, responsible, credible, tolerable and hospitable may not be achieved in your tenure. But, good foundation will make some of your proposals possible and create conducive environment for successive administrations to implement some or all your proposals. You are no doubt a master of good ideas, planning and also an active doer.

As a result you are in a position to place things in their order of importance; therefore the need to see the reduction of oil consumption and development of alternative energy that will also create millions of green jobs, etc., as paramount. This plan will not only reduce or stop the flaring of noxious gases (that I call the mother of global warming) by reckless companies such as Shell, Chevron, and other production corporations in Niger Delta and beyond.

It will reduce the pressure on oil producing communities such as these Nigerians who happens to be the goose that lays the golden eggs, but forced to live on empty stomach. Less consumption, which means less money in the coffers of government would likewise help greedy and corrupt rulers-such as obvious in Nigeria-sharpen their reasoning, care more about the general population and instill justice that will conduce to peace, security and economic stability.

Please take a stand on the suffering and current killing of the Niger Delta people by its own government. The government has repeatedly internalized the genocide it is committing against the people for asking a fair share (or resource and environmental control) of proceeds from their land. The issues of oil and gas that caused the inhuman treatment; the killing in Umuechem, Ogoni, Odi and the present massacre in the Niger Delta are of global interest. The act of genocide as the case in the region calls for international intervention to save humanity. According to Dr. Martin Luther King, Jr., injustice anywhere is a threat to justice everywhere. The injustices and killing fields in the Niger Delta is adversely affecting lives in America and the world over. Therefore, the time has come to act. Silent and inconsistency have plagued the world for too long. They are more dangerous than poverty and HIV/AIDS.

Please do not allow another Rwanda or Darfur to repeat in Africa or any part of the world. Former President Bill Clinton watched Ken Saro-Wiwa and 8 others hanged in 1995. More than 4, 000 Ogonis killed between 1993 and 1999, 30 villages raised to rubble and more than 100, 000 people internally displaced. How did Clinton watch the Ogoni 9 hanged, and Why? Because he refused despite clamors to impose economic sanction on Nigeria and continue the purchase of oil. That is because oil was involved nothing else mattered, but is oil thicker than blood? No, not at all! By implication, he tacitly approved the hanging contrary to the flimsy excuses or testimony he is giving, that he made a call to Sanni Abacha, the military dictator to pardon Saro-Wiwa and others. How do you pardon someone who committed no crime?

He also watched Rwandese slaughtered into about 800, 000 pieces. If he did in Rwanda what he did in Bosnia, the story should have been different. African history should have favored him. George W. Bush also watched Darfur crushed even though Collin Powell, then Secretary of State, international genocide monitoring organizations and others testified that what was happening was genocide because tribal or ethnic groups, children and women were targeted. He was reported in 2005 to have proposed the U.S. Marines deployment to Niger Delta so as to crush the people and freedom fighters. In 2008, newspaper reports also have it that he and Prime Minister Gordon Brown of Britain pledged military training and support to the irresponsible government of Nigeria against the people of the delta. Why? Because they are Africans so their greed and exploitation of the continent can continue in a bid to murder the rich but made impoverished people that the west may live. Bush also donated two gunboats to the Nigerian government.

I hope and pray you will not pay deaf ears to the cry of the Niger Deltans, other Nigerians, Africans and the world at large. The innocent, poor and oppressed are looking up to you. We know you would not perform magic, and bureaucratic bottleneck stands in your way, but with clear focus, proper planning/strategies and silent listening to the cry of the disadvantaged and repressed a mark would be made that will double your capacity and "Audacity of hope," and you would be crowned the grand commander of hope for the marginalized, poor and those who are about to die.