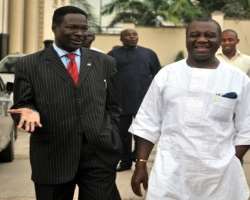 Until I read in various newspapers the judgment handed down by the Supreme Court in respect of 86 oil wells, I did not know that there was such a dispute between my state, Akwa Ibom and Rivers State. Since nobody has found it necessary to involve or even inform me, I would not have made any comment, but I am constrained to state my position by the statement coming from the Commissioner for Information, Mr. Aniekan Umana to the effect that I am to blame for what has happened to Akwa Ibom State.

On several occasions in the past Governor Godswill Akpabio and members of his government had sought to shift blame for their numerous failures on me. In the Leadership Weekend newspaper of October4, 2008 an article appeared with the title “Commissioner Blames Attah over 10th Anniversary Hotel Saga”. On 13th October, 2008 I found it necessary to write to Gov. Godswill Akpabio to warn that “I shall no longer accept the position of the whipping boy for every inept act of your government or continue as the butt of every ridicule”. Sadly the government of Gov. Akpabio continues to fumble and continues to look for who to blame.

Commenting on the Supreme Court judgment, Mr. Umana, the Secretary to the State Government has insisted that I did not sign any agreement with Dr. Peter Odili the Rivers State governor at the time and has challenged the present government in Rivers Sate to show proof of a signed agreement between the two states on oil wells. Eng. Ekpotu in his reaction has insisted that the delimitation of boundaries is the statutory responsibility of the National Boundary Commission and it is ridiculous to suggest that any two governors can take over that function by sitting down to sign an agreement on what should be the boundary between them. The governor, Barrister Godswill Akpabio, my former Commissioner for Environment and Mineral Resources, speaking through his Hon. Commissioner for Information wants the world to believe that I had sold the rights of Akwa Ibom people over the 86 oil wells to Rivers State for selfish personal interest. How sad indeed.

For those who may want to be reminded, the first front in the Resource Control battle was the issue of the offshore-onshore dichotomy. The Supreme Court went along with the former President, Chief Olusegun Obasanjo and decided that the boundary of littoral states in the low water mark. This was at a time when Nigeria was struggling at the United Nations to register its Exclusive Economic Zone. I rejected the Supreme Court ruling and pointed out that it is the aggregate boundaries of the federating units that define the boundary of any federation. The seaward boundary of Nigeria therefore must be the low water mark as no country can have two maritime boundaries and that our application at the UN was bound to fail.

This is what brought about the first “political solution” by which the littoral states were allowed to extend their boundaries, for the purpose of derivation payment, to 200 metres isobaths. Incidentally all of Akwa Ibom State’s off-shore wells are within the 200meter depth.

Quite suddenly and totally inexplicably the former President, Chief Olusegun Obasanjo then turned around and arbitrarily seized some oil wells to the east from Akwa Ibom State and gave them to Cross River State and as many as 172 wells to the west which he gave to Rivers State. Every attempt to receive some explanation or relief failed. I hired two sets of maritime experts from London and Norway to help determine the boundaries between the three states of Cross River, Akwa Ibom and Rivers states. Their findings were rejected. I suggested that the matter should be resolved by resorting to the provisions of the United Nations Commission on the Law of the Sea (UNCLOS). This too was rejected. By the way, this particular application would have left Cross River State with some oil wells based on historic titles despite the loss of Bakassi and the eventual judgment of the Supreme Court that declared Cross River State a land locked state.

In total frustration I went to court. I was threatened and was told that the matter will not receive any more presidential consideration unless I withdrew the case from the court. Rather than withdraw totally, I asked the lawyers to apply to suspend further prosecution to allow for possible out of court settlement. That was when the former President proposed the second “political solution”- to give back to Akwa Ibom State 50% of the 172 oil wells that had been taken from it and given to Rivers State. Following upon this the Boundary Commission was ordered to go and produce a boundary between the two states that would reflect this decision. I do not believe that till today it has been possible for such a boundary to be drawn because it would zig-zag between the oil wells. I may also add that we did not go back to court to file any terms of settlement because all these arbitrary seizure and release were considered as interim.

This occurred towards the end of my term and I do not believe that Akwa Ibom State under me benefitted anything from those returned wells. However it made it possible for Akwa Ibom State after me to become the highest revenue earner by far and for Barrister Godswill Akpabio to be the first governor ever to earn more than one trillion naira in a term of four years.

Whatever may have since happened to the oil wells in Akwa Ibom State must be seen as the sole responsibility of the government of Barr. Godswill Akpabio. If he has lost our oil wells, it would be yet another testimony to how he has, through fumbling ineptitude, negated the gains that I had won and the development that I had put in place for Akwa Ibom State. It is only a bad worker that constantly blames his poor performance on his tools and I think it is time Barr. Godswill Akpabio should own up to his monumental failures and stop seeking to heap the blame on me.

As a last word, I want to share the views of the ACN gubernatorial candidate of Akwa Ibom State, Senator John James Akpan Udoedehe, that we cannot make a determination on the return of the 86 oil wells without also looking at the seizure, in the first instance, of the 172 wells from Akwa Ibom State. The matter, as he said, is more political than judicial and a final determination must be based on a known principle or law rather than the whims of an imperial dictatorial leader.

Written by the former Governor of Akwa Ibom State, Obong Victor B. Attah.