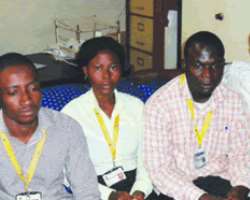 Mr. Biala and three of his classmates who are final year students of the Department of Mathematics of the university also did the institution proud by emerging the second best team out of 18 teams which competed for honours at the event.

The UNILORIN team which included Afolabi Yusuf Olawale, Akinlabi Grace Oluwafunke and Abdulsalam Sakirudeen participated in the two sessions of five hours each in which they competed among 72 students and 18 universities.

The students, aged between 23 and 27, and in 400-Level, narrated how they were selected for the competition. Biala, the leader of the team, who spoke on behalf of others stated that 'we were selected according to our performances in the school. We had a small test and were taken to represent the school. After our shortlisting, the lecturers encouraged us and gave us insight into what we are going to meet at the competition. Also we read separately and then came together to rub minds while the lecturers kept giving us series of textbooks to aid our learning and preparation towards the contest.'

Biala, who is second in the family of four, says he likes honesty, reading and football but hates cheating. In an interview with Education Review, he disclosed that they were examined in the areas of Pure Mathematics called Mathematical Analysis, Abstract Algebra, Linear Algebra and Complex Analysis, amongst others. 'We were asked to state some theorems like questions and use them to solve or analyse some problems,' he recalled.

He stated that before they left for the contest, 'our lecturers called us and spoke to us that the people we are going to meet have the same brains like us and that they are not better than us because they are students like us. They said we are being taught the same topics, as such we should not nurse any inferiority complex or fear. It was with that kind of pep talk that we went in for the competition.'

There were anxious moments though which came while they waited for the result of the competition. 'When the results were yet to be released, everybody were anxious to know the outcome especially our lecturers who have spent their quality time preparing us,' Biala, a lover of Barcelona football cluband ardent admirer of Lionel Messi, recounts. 'It was when the result was released and we emerged the winner that our fears melted.'

Akinlabi Grace, the only female on the team, recalls that when 'we were preparing, we were six in number but four was picked for the final contest. Then, we used to rub minds together to know what we didn't know and to explain to each other some difficult Mathematical concepts.

'Our lecturers too imbued us with some levels of courage and advised that we should not be in a hurry to leave the five hours written competition, but ensure we touched every aspect of the question we are given. For me, I touched almost all the questions in the examination and going by the tradition of our school during the examinations, we usually stayed on our seats till the last minute given for the competition. I think that gave us the victory. At the initial stage, anxiety crept in when I saw over 72 of us but thank God, I made it.'

Speaking on the outcome of the competition, Dr (Mrs) Fadipe Josephine, one of the coordinators, said: 'in fact, when we started coaching the students based on their performance and attitude, we were quite sure they will come out victorious. The students that came first got 100 over a total of 240. So out of 72 students drawn from various universities in Nigeria, our student came first, and others eight, 15th and 20th respectively.

'In fact the students' emergence is great but I want to appeal to the organiser that in future the winners should attach monetary awards no matter how small. This will serve as a great encouragement to them.' Noting that the future of Mathematics in Nigeria is great if stakeholders can continue to encourage students with both financial and material awards Fadipe recalled that 'while I was schooling at the University of Ibadan, I was given little money when we won some awards.'

Recounting his anxiety during the tension-soaked competition, the Chief Co-ordinator of the team, Dr. Makanjuola S.O, a senior lecturer in the Department, admitted that he was afraid of students of University of Ibadan.

'I felt a little jittery because I finished from University of Ibadan and I know the extent of Pure Mathematics done there,' he said. 'We do not have enough hands to do same here (University of Ilorin). 'So by the time I was there together with them, I knew that we were in for some challenges from those students. That was one of my fears. But I told them that those students do not have two heads; they also have one head like they do. They were encouraged. I told them to be very composed and do whatever they feel they know because the questions given to them at the competition seem tougher than the ones we give them in the classrooms. 'By doing the ones you know at least you will be able to get some marks.' So I said. 'They were very obedient and I love them for the way they conducted themselves.'

Giving a brief background to the competition, the Head of Department (HOD), Prof Tinuoye Adediran, said the National Universities Commission (NUC) declared 2011 as Year of Mathematics and the competition is part of the programme aimed at enhancing development and awareness of mathematics among students and its importance to the society. The final ceremony in which the President is expected to grace and award medals to winners at the competition, will be done in Abuja.