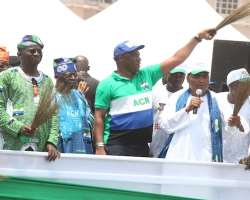 The decampees who addressed supporters after being received into the ACN said they decided to abandon the ‘leaking umbrella’ of the Peoples Democratic Party because they want to be part of the great work being undertaken by the Babatunde Fashola (SAN) led administration in Lagos State.

The former PDP stalwarts declared that they strongly desired to be part of a government that caters for the interest of a greater number of people adding that there is simply no basis for comparison between Mr Babatunde Fashola (SAN) and his PDP opponent, Dr Ade Dosunmu.

Mr Ademola Seriki said as Minister of State for Interior, when the proposal was being drawn for the expansion of the Lagos Badagry Expressway, it passed through his table and he had no hesitation in approving it, because it is for the betterment of the generality of the people of Lagos.

He called on Lagosians to come together and work to put the state in the forefront politically, adding that the present administration in Lagos State under Mr Babatunde Fashola (SAN) has shown what the party is capable of doing and should be supported to pull it through.

In his address, the Lagos State Governor, Mr Babatunde Fashola (SAN) said the PDP in the last 12 years has been sloganeering about reforms and reforms but has not succeeded in achieving any reform.

He added that the party promised to introduce reforms in the economic sectos but have left Nigerians exchanging Naira at 156 to One dollar when the same was exchanged at N88 to one dollar in 1999.

He said even the power reforms that was promised to Nigerians, 12 years after, constant electricity still remains a dream just as security reforms promised by the PDP is yet to materialize 12 years after.

The Governor reiterated that before the PDP is reformed the party must be taken out of power and taken to rehabilitation centre so that the people can begin to see good governance.

He said this is in addition to the two million gallons capacity Mini Water Work that was handed over a couple of weeks ago as well as two new schools complex handed over to the people of Ajah recently.

Governor Fashola said Government has taken care of water problem confronting the people at Osapa London, Aro Maiyegun and Ologolo and is also promoting transportation by water which has brought about the commencement of ferry services from Victoria Garden City to Falomo for those who do not intend to make use of the Lekki Ajah Epe Expresway.

The State Governor said work is progressing on the Maternal and Child Care Centre at Sangotedo which is billed for handing over by the end of the year just as 18 new roads have been earmarked for construction in 2011 in Eti Osa.

Also speaking, the former Governor of Lagos, Asiwaju Bola Ahmed Tinubu gave an insight into the agreement that brought about the concessioning of the Ozumba Mbadiwe road to Lekki Concession Company.

He said the PDP members are only displaying their level of intelligence by accusing him and Governor Fashola of underhand dealings in the LCC, saying it took almost three and half years to negotiate the agreement between both parties.

He challenged all those accusing him of any wrong doing on the project to come forward with their evidence, adding that if they could prove it, he will quit politics.

Asiwaju Tinubu said that every voter should go to voting centers with their mobile phones to record results and all events during and after the polls.

He urged residents of the Lagos Central Senatorial District to vote for his wife, Mrs Oluremi Tinubu, the ACN senatorial candidate for the zone because she deserves the votes having worked tirelessly during the June 12 1993 struggle against military dictatorship.

Party flags were presented to candidates of the party like Chief (Mrs) Oluremi Tinubu for Lagos Central Senatorial district, Prince Jide Akinloye for House of Representatives (Eti- Osa), and Engineer Gbolahan Yishawu and Mr Alimi Kazeem Ademola for the House of Assembly Constituency One and Two respectively.

Among those who attended the rally were the First Lady, Dame Emmanuella Abimbola Fashola, the Deputy Governorship candidate of A.C.N in the State , Hon. (Mrs) Adejoke Orelope-Adefulire, members of the State Executive Council, the A.C.N State Chairman, Chief Henry Ajomale, other party leaders and supporters of the ACN from the Local Government area and across the State.