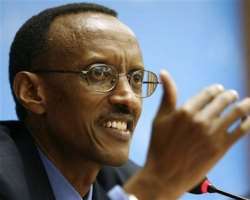 A luxury commuter bus pulls up by the kerb to pick up passengers. A young woman quickly jumps in, retrieves a smart card from her wallet and swipes it against a machine next to the driver before taking her seat. A routine occurrence in Germany or the US, but this is Rwanda, one of the world’s poorest countries, where genocide in 1994 nearly brought the tiny landlocked African country to its knees.

The smart-card ticketing system is known as twende. Its introduction in the capital, Kigali, early this year by Kigali Bus Services is the latest in a string of technological advances that are altering the way Rwandans communicate, pay for goods and services, and go about their daily lives. In the process they are propelling Rwanda into a regional hub for information and communications technology (ICT).

Rwanda emerged from the 1994 genocide with a traumatized populace and an economy in dire straits. Back then, President Paul Kagame’s new government confronted enormous challenges at every turn: millions of refugees and displaced people to be resettled, genocide victims awaiting justice and an economy that needed restarting. Fast forward to 2011. There is much evidence that thoughtful policies are transforming an agrarian society into a sophisticated knowledge-based economy and trying to instil a sense of national identity and unity among Rwandans.

Business-friendly policies
According to the World Bank, it is now easier, faster and less expensive to operate a business in Rwanda than in most other African countries. Only Mauritius, South Africa, Botswana and Tunisia now fare better.

Encouraged, investors are returning the favour. Between 2005 and 2009 foreign direct investment in Rwanda jumped almost 15-fold, from $8 million to $118.7 million. Last year, the country’s gross domestic product grew by 7.4 percent, on top of an annual average growth rate of 7.5 percent between 2004 and 2009.

‘Singapore of Africa’
But it is government’s ambitious plans to transform Rwanda into a regional high-tech hub — a “Singapore of Africa” — that has attracted the most attention. The first plan, from 2000 to 2005, focused on creating an enabling environment for ICT initiatives. The second, from 2006 to 2010, built the ICT backbone, including laying high capacity fibre-optic cables. The third, scheduled to run from 2011 to 2015, will speed the introduction of services to exploit the new technology and, authorities are convinced, push Rwanda ahead of regional rivals.

The minister in the office of the president responsible for ICT, Ignace Gatare, told Africa Renewal that the third phase will strengthen skills-training centres and develop an “ICT culture” in schools as a means of creating “a critical mass of IT professionals.”

Early this year, the state-run Rwanda Information Technology Authority announced that it had completed a nationwide 2,300 kilometre fibre-optic cable. The network connects Rwanda to the outside world by means of Seacom’s east African undersea cable. It provides faster and cheaper Internet access than the satellite connections it replaces.

More mobile phones
The three mobile phone operators, Rwandatel, MTN and Tigo, are already exploiting the fibre-optic network to extend their reach. Mobile phone penetration, while expanding, is still low, however. In 2010, about 2.4 million people — or one in four Rwandans — owned a mobile phone, a number analysts expect to top 6 million by 2015.

The government is negotiating with mobile operators to bring down the cost from the equivalent of $14 per connection to around $3.50 and offering to bear half the total cost of a handset. Talks are also being held with the Rwanda Development Bank to provide micro-loans for handsets.

One of the fastest-growing businesses among the youths is selling mobile top-up cards, often on street corners. Internet cafes are also gaining popularity as the use of social media tools such as Facebook and Twitter goes mainstream.

From health updates to crop prices
Already technological innovations are affecting virtually every aspect of life in Rwanda, from health and education to banking services. Rwanda is currently distributing free mobile phones to thousands of community health workers throughout the country to keep track of pregnant women, send emergency alerts, call an ambulance, screen counterfeit medicines or provide updates on health issues to local clinics via text messages.

Rwandans are now enjoying the convenience of banking through mobile phones, a service previously available in other African countries. Early this year, MTN teamed up with the Commercial Bank of Rwanda to launch a mobile money service. It allows thousands of subscribers to transfer money between accounts, withdraw cash and pay electricity and pay-TV bills using SMS messages.

Farmers too can now receive updates on the market prices for their crops, with an SMS software programme called e-Soko (“e-market”), eliminating middlemen and allowing them to pocket the extra cash.

Telecentres
In response to the demand for more and faster Internet access, a network of telecentres connected to the fibre-optic cable is springing up in all the country’s 30 districts. These telecentres will offer every Rwandan town high-speed domestic broadband access. With Rwandans just beginning to feel the impact of its new technologies, the journey to economic prosperity may be just a card swipe away.