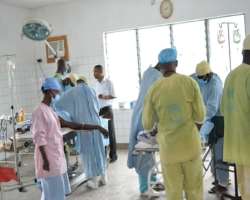 The doctors’ union made the announcement at a press conference on Saturday after it called an emergency meeting. They said they have reached an agreement with the state government who have promised to pay the new salary scale (CONMESS) and also promised to lower taxes for doctors.

The doctors also announced that the state government has recalled the sacked former Chairman of the State Medical Guild, Dr. Ibrhim Olaifa.