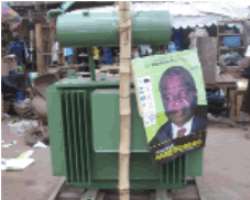 The days of politics of terror and blood must have returned in Anambra State. This is happening when people think politics of godfatherism, kidnap of a serving governor and wanton destruction of government property, had become a thing of the past in a state, which prides itself as the Light of the nation.

Or, how can one describe the recent, unwarranted attacks on the former governor and Action Congress of Nigeria (ACN) candidate for Anambra Central senatorial zone, Dr Chris Ngige, and the Accord Party senatorial candidate, Senator Annie Okonkwo?

Dr Ngige had set out to enter Onitsha Main Market for what he expected to be the triumphant entry of 'man of the people,' but it nearly turned bloody, as he and his convoy were attacked by some thugs, who prevented his entry into the market. They were said to have smashed his vehicle and others. The dogged politician was said to have escaped death by hair's breath.

As the politician and his supporters were yet to come to terms with the motives of their attackers, a separate, ferocious gang attacked Senator Okonkwo. The serving senator, who honoured an invitation by traders at Eke Awka Main Market, narrowly escaped being stabbed by thugs.

He was about addressing the traders when some young men among the crowd brandished their machetes and went straight for him before they were stopped by his aides. He sustained minor injury even as his cloth was torn.

Before the attack, Okonkwo had donated a transformer to the market to solve the power problem the traders had been facing for the past seven years. The excited traders, who were enthusiastic to meet with and listen to the man who by the donation, had restored light to the market, were forced to leave the area.

The embattled Senator told reporters after the attack said that: 'first of all, it is very unfortunate because when I came into the market, all the market people were jubilating. I could see the excitement as I came into the market. They all gathered together for me to address them and when I was about to mount the podium, I noticed that there was pandemonium. The next thing I saw were people with machetes and they were coming straight to attack me.

This is the least I expected to happen in a state like this. I believe that this is just a contest and of course, we have said that it is going to be free and credible election, but I don't know that people are becoming so desperate.' According to the Director-General, Annie Okonkwo Campaign Orgnisation, Chief Joe Uzodike, if not for the timely intervention of a policeman, one of the thugs would have stabbed his boss.

He explained that it was when one of the attackers refused to retreat that he was shot in the leg by a policeman. 'The first shot got him on the leg; I was physically present, watching him.

The man slumped, got up again and with all his weight, he wanted to dash straight to the head of that policeman and he gave him the second shot. That was exactly what happened.'

Ngige's attack at Onitsha was carried out by some political thugs, who claimed to be acting on 'orders from above.' They were said to have perpetrated the act with members of Anambra State Environmental Protection Agency (ANSEPA) and Market Task Force.

Indeed, it was the Task Force that first, stopped Ngige and his entourage from entering into the market. Not even the presence of some policemen, invited by Ngige, following the attack on him, could make the thugs sheathe their swords. The angry traders, who formed ring round the former governor to prevent further destruction of vehicles in his convoy, insisted he addressed them at the point where the thugs retreat.

The defiant Ngige, who vowed not to be deterred by the attack said: 'Even if they destroy my cars, I will go for my campaign on foot. They cannot stop the people of Anambra State from supporting their candidate and that is me.

'You all saw what happened and even some of these Task Force people were hiding their faces because they knew that what they were doing was not right. Just like our Lord, Jesus Christ said during his triumphant entry into Jerusalem; the Pharisees and Scribes wanted to stop the people from receiving him and he said 'even if you do that, God would raise stones to sing his praises'.

'This has shown the level our politics has degenerated to. Those who have lost their deposits in the electorate are now licking their wounds going by what happened today.'