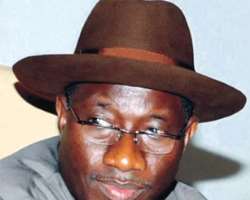 For those who have been following the politics of Bayelsa State, the Peoples Democratic Party (PDP) presidential rally held at the Samson Siasia stadium on March 8, was more than a rally for President Goodluck Jonathan and Vice president Namadi Sambo.

Before now, speculations had been rife in the state that some parties led by the Labour Party (LP), had adopted Jonathan as their presidential candidate, urging the people to vote for Jonathan, but vote for other candidates of other political parties in the various elections.

According to the story, Jonathan is not pleased with Sylva and some of the other candidates and has worked an agreement with some the candidates, especially in LP to contest and after winning defect back to the PDP.   However, the presidential rally put paid to all the stories as Jonathan not only raised the hands of Timiprey Sylva signifying his acceptance, he also gave the opposition a bitter pill to swallow. Indications had emerged few days to the rally, that the PDP was in for something good.  Aside the efficient mobilization of people from the grassroots, plans was made to treat visitors to a swell time as all the major hotels in Yenagoa were fully booked to give them a taste of the Ijaw hospitality.

On the D-day, the Sports complex was filled to the brim with Duncan Mighty, Barrister Smooth and Daddy Showkey rendering crowd pulling tracks from their various albums.

Speakers such as the immediate past National President of the Ijaw National Congress, Prof Kimse Okoko,   Chief Thompson Okorotie, Mr Clever Ikisipo, Minister of Petroleum, Mrs Diezani Madueke, Nollywood celebrities, Kanayo O. Kanayo, Stephanie Okereke,  the deputy-governor, Mr. Werinipre Seibarugu eulogized the virtues of Jonathan and urged the people to vote for PDP. While Okoko, Madueke, Okorotie, Ikisipko, Kanayo told the people  of the ability of Jonathan to lead the country, Okereke painted the human side of the President especially his contributions when she had an accident in 2005 when coming to Bayelsa for Africa Academy Movie Awards (AMAA).

Sylva, in his remarks, described Jonathan as one of the finest to have come from the Niger Delta, adding that for Bayelsans, there is no need to campaign as they are already dancing to celebrate the victory at the polls.

He explained that the PDP has no problem because Jonathan is a marketable material who is accepted in all parts of the country. According to Sylva all his governor colleagues have confirmed to him that they would deliver their states to Jonathan in the elections. Not done yet, he said a vote for Jonathan would indicate that Nigerians have finally accepted the Niger Delta as part of the country.

'He is the best President the nation could boast of in term of transparency and accountability. The president is only completing the tenure of the late President Umaru Yar'Adua. In April, Nigeria will have the opportunity to show the Niger Delta that they love us and the only way is to vote for us.'

When Jonathan mounted the podium, he became the cynosure as he dealt a fatal blow into the opposition camp as regards the stories that he was backing candidates from other political parties.

Hear him: 'You know me. I, Goodluck Ebele don't have two tongues; I don't tell lies and say I am playing politics. I will not support a candidate who is not in PDP. Bayelsa is entirely a PDP state. You must all go and vote PDP candidates; all the PDP candidates are mine. If somebody tells you that I am supporting someone from another party, tell him he is telling lies. In 2006, when we had problems and the elders called us to Abuja to devise a way we are going to pick our candidates. Some people came to meet me and said some of those candidates in PDP are not our people, so we should support candidates in other parties and after the election they would defect back to the PDP, but I said no.

During the primaries, I did not play any role to influence the election of any candidate in the primaries because everybody was supporting me. Now that you have picked your candidates, I am telling you that you vote for all PDP candidates. I am a PDP member and I would never be involved in anti-party activity.'