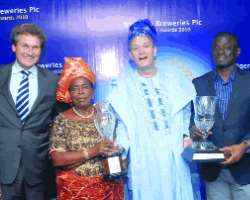 For selling more than three million carton units of Nigerian Breweries (NB) products in 2010, Magulf Global Enterprises was penultimate Friday rewarded with a brand new Iveco Truck. At the company's annual customers award night held at the Expo Hall of Eko Hotel in Victoria Island Lagos, Magulf Global which also won the same award for selling the highest volume of the company's products in 2009 was honoured along side several other distributors and transporters.

As it was in 2009, the company's best Key Transporter for 2010 was E.O Nnabugwu and Sons Limited. The company was rewarded with 33,000 litres of Diesel. Mr Onuoha Nnabugwu, Managing Director of the company said he was delighted to have won again. According to him, he was particularly happy about his company's association with a world class company like Nigerian Breweries. On her part, Chief (Mrs) Mary Agbonifo, Managing Director of Magulf Global said she was grateful to God for the award. Chief (Mrs) Agbonifo, who was accompanied to the ceremony by her husband Chief Godspower Agbonifo who is also a key Transporter of Nigerian Breweries, thanked Nigerian Breweries for recognizing her company's efforts.

Mr. Nicolaas Vervelde Managing Director NB Plc said the ceremony was a celebration of partnership between brewery giant and her key partners. He thanked all the distributors and transporters for standing by the company at all times and urged them to continue doing their best to push the company's products to the final consumer. Mr. Hubert Eze, Nigerian Breweries.