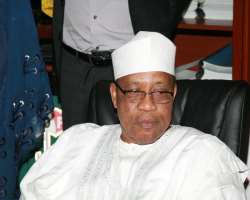 ABUJA, March 13, (THEWILL) - The Attorney General of the Federation and Minister of Justice, Mr. Mohammed Adoke (SAN) and the central bank have asked the Federal High Court in Abuja to reject the Okigbo panel report as “the report is not admissible in law because it has not yet been published in a gazette and no white paper has been issued on the report.”

The AGF and the CBN were responding to a suit filed against them in September 2010 by a coalition of six civil society groups seeking information on how $12.4 billion oil windfall of between 1988 and 1994 was spent.

The suit no FHC/ABJ/CS/640/10 was brought under the Fundamental Rights (Enforcement Procedure) Rules 2009 by the groups’ lawyer, Mr. Femi Falana, at the Federal High Court, Abuja.

In their separate preliminary objections filed last week before the court, both the AGF and the CBN also argued that the plaintiffs have no locus standi; and are not juristic persons as they are not registered.

The CBN said that the suit is not justiciable as it is not covered under the fundamental rights provisions of sections 33-46 of the 1999 Constitution.

The AGF said that the affidavit in support of the suit was “not duly stamped.”

Adetokunbo Mumuni, SERAP executive director said that, “We strongly reject the objections raised by both the AGF and the CBN. We are finalising a reply, which we will file in court in due course.”

Earlier, the plaintiffs in their suit had averred that: "In 1994, the Federal Government set up the Pius Okigbo Panel to investigate the activities of the Central Bank of Nigeria and recommend measures for the re-organisation of the bank. In the course of its assignment, the Okigbo Panel found that the $12.5 billion in the Dedicated and Special Accounts had been depleted to $200 million by June 1994. As a result of the alleged mismanagement of the said $12.2 billion by the military President, General Ibrahim Babangida, the Okigbo Panel recommended that the Dedicated and Special Accounts be discontinued."

Besides, they want the court to order the respondents to prosecute anyone indicted by the report, recoup the money from them and return same to the treasury.

According to the plaintiffs, "The need for information regarding the spending of $12.4 billion oil windfall is important to promote transparency and accountability in the management of public resources and to fulfill Nigeria’s international obligations to promote the development of the country. Access to information of this nature is especially important in this country, which is struggling to establish the rule of law and democracy in the face of underdevelopment, poverty, illiteracy and diseases. The right of access to information is also crucial to the realisation of all other human rights, including the peoples’right to their natural wealth and resources."

"Public bodies hold information not for themselves but as custodians of the public good and everyone has a right to access this information. Unless the Court compels Mr. Adoke and the CBN to disclose the information requested in this case, the information may never be disclosed and Nigeria will remain in breach of its international anticorruption and human rights obligations and commitments," the plaintiffs further argued.

The plaintiffs are contending that, "the right of a people not to be dispossessed of their wealth and natural resources is not just any ordinary right, but the fundamental human right. This right is an essential element of peoples’ economic security, survival and independence.

"The point about the permanent sovereignty of peoples over their natural resources is not that the resources in question may not be mined and sold. Such doctrine would render them valueless. The point is rather that the national community in which the resources are found is to be a significant beneficiary of their exploitation. The nation-state is now expected to contribute to the welfare of all inhabitants without even having the right to discriminate among them," the plaintiffs further argued.

The Plaintiffs want the court to declare that:
•The respondents are individually and/or collectively required to guarantee to the applicants and Nigerians the right to receive information regarding the spending of $12.4 billion oil windfall documented by the Pius Okigbo Panel report; the right to natural wealth and resources; and the right to development, as recognized and guaranteed by Articles 2, 9, 21, and 22 of the African Charter on Human and Peoples’ Rights (Ratification and Enforcement) Act.

•The failure, negligence and/or refusal of the Respondents individually and/or collectively to publicly and urgently release detailed statement of account relating to the spending of $12.4 billion oil windfall between 1988 and 1994 as documented by the Pius Okigbo panel report is illegal and unlawful as it violates Article 9 of the African Charter.