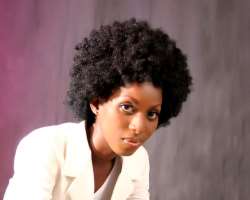 Petit rising star, Tiwabanks is one of the new set of artistes adding innovations to their art in order to make it unique. The sonorous rapper, who recently dropped three singles, has dismissed the rumour that she is dating popular musician, Abolore Akande aka 9ice. She also said both of them are playing different kinds of music contrary to popular opinion.

Hear her: “I don't think 9ice and I play same style of music. He is a man while I am a woman. The fact is that we meet on concert stage but we've never talked to one another. I don't think he can even recognise me when he sees me. I respect him as a brother but there is no intimacy between us.”

In this chat with Blockbuster, Tiwabanks touches on many issues. Excerpts:

Tiwa is a compound name which simply means 'ours' while 'banks' on the other hand was extracted from my surname, Bankole. I coined Tiwabanks as the title of my first work, Tiwatinwa, which when translated in English language means “pride of my heritage”. Tiwantiwa talks about my life's struggles. I wanted to use my talent via Tiwantiwa to make people know me. I want to use the music to encourage and also liberate people. I have been called different names before just because I told some friends that the future of music belongs to Nigeria. That is it. Tiwantiwa simply means originality, neutrality, confidence, encouragement and posterity.

I have worked with many heavy weight musicians in the country. My debut single, Song for Parents was released in 2000. And in 2008, I released Paribotoriboto. I dropped Jule in 2009. These singles made waves but the unfortunate thing was lack of fund that made it impossible for them to gain popularity.

I just released three singles, Tiwantiwa, Jule and Paribotoriboto and there is no radio station in Nigeria that doesn't play these songs. The singles are accompanied with remixed and reloaded videos. One thing I discovered is that they would play 9ice's music first before my own. I do not understand the reason. But I think those DJs perceived I used the same tempo as 9ice.

9ice and I do not have any relationship. I don't intend to share his success because, sincerely speaking, he has 'arrived'. I want to create my own place in the music industry. Certain music presenters have tagged me as 'the 'female version of 9ice'. I would have corrected those people if they had said it in my presence. But I reasoned again that they had said that after evaluating my work and by way of appreciating it, likened me to 9ice, in terms of vocal dexterity and instrumentation. When people heard Dagrin they said he sounded like Ajasa. But the fact is that I'm not involved in any affairs with 9ice. We have not even for once had a hand shake. Nothing like that can come up between the two of us because I'm a focused person.

I'm most inspired by situations, events and daily occurrences around me. The street is the first immediate contact to get good and nice songs. But unfortunately because I'm a woman I'm somehow not conversant with the streets. If I could be free from day-to-day dangers, I would stun the world. As a performer, I go to the streets to watch activities; the sufferings, the pains, the fun, and how people respond or react to those circumstances. I'm a lover of the streets. I prefer the streets to the amusement parks. No matter how fortunate I become, I can't forget where I began from. As the Rastafarians can never neglect their base, which is the ghetto, I cannot neglect the Lagos streets. Most successful musicians came up from the streets.

My voice, my identity

I personally discovered myself. I knew from childhood that I have a sonorous voice. I have a very peculiar voice. The beats are just secondary; my voice is the primary factor. It makes people single me out from others. My voice is my style and identity because it makes the difference. Michael Jackson's voice was his identity. B.I.G, 2Face, 2Pac, Ceiline Dion, Angelic Kidjo and many others created their identities merely from their voices.

Singing in Yoruba is in vogue now, but that's not the reason I sing using the language. I was brought up speaking Yoruba language, and I stuck to my mother's tongue in order to be real. I hate to use computer programming on my voice. In the late 1990s, popular Beninoisesinger, Angelic Kidjo made the world music chart primarily because of her voice and language, which sounds like the typical Yoruba language. And again, I'm fond of backing songs up in maxims.

I don't mince words to say Tiwabanks remains the only Yoruba female rapper in Nigeria. I have checked everywhere and could not see any other. I want to create a genre for that.

I don't only listen to people's songs; I go the extra mile to study their lives. I love Tony Braxton, Ceiline Dion, Brandy, Onyeka Owenu, Salawa Abeni, and Christy Essien among others. They are all my role models.

The upcoming artistes do not have to surrender. I used to listen to 2Pac Shakur's That is Just the Way It Is. I believe the agony, the humiliations and the negligence people in authority display would end one day. Let the upcoming musicians continue topray, and remain focused. When I heard the story of Governor Rauf Aregbesola of Osun State, a man who throughout his childhood was a houseboy, I then realised that there is nothing God cannot do.