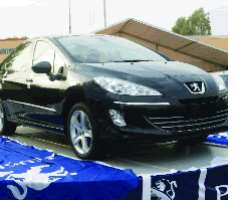 Photo:Sun News Publishing
More Stories on this Section
PAN Nigeria Limited on Tuesday used the platform provided by the Kaduna International Trade Fair, to unveil one of the latest in Peugeot's modern series - the 408, with a hint that the car would soon start rolling off the same production line where the predecessor 406 was manufactured for many years with an appreciable level of local content. Production of Peugeot 406 was officially rested in 2009 at the Kaduna plant even though the car remained available months after.

At the ceremony which climaxed PAN Nigeria's day at the annual fair, guests were informed that the new car was going into the market with advantages over its peers, such as aesthetic appeal, an array of features and a 2.0 litre engine which is miserly on fuel consumption.

Deputy Managing Director, Mr Jaime Pena, who introduced the new kid on the block just before it was officially unveiled to the press by the president of the Kaduna Chamber of Commerce, Alhaji Umaru Yahaya, said it is a very important product to his company, adding that though it is taking the place of 406, it is a much modern car and a beneficiary of the latest Peugeot technology.

.The new 408 has a sequential 4-speed transmission with Tiptronic system, and flaunts safety features, such as front, side and curtain airbags, anti-lock braking system, electronic brake distribution, electronic stability programme and eemergency brake assistance. Both the blind-spot eliminating side mirrors and the rain-sensitive wipers also enhance safety.. To obviate theft, there is a provision identified as electronic engine immobilizer,..

Also giving more insight into the car's salient characteristics, the Head of Sales, Mrs Kelechi Obi and the Senior Manager (Marketing Strategy and Planning), Danjuma John-Ekele, said the 406 has a competitive edge over other brand's products, considering that the output of its engine and the wider choice provided by the various trim levels. The 67-litre tank make for a long drive without refueling, they pointed out

The phasing out of the 406 and the arrival of the 408, according to the Head of Sales, was not by happenstance, but part of well planned, strategic thinking, adding that the former, having served out its model tenure, was bound to give way to the product of today.

She explained that the 406 line was being updated, and would soon be ready to start producing the newcomer, which is for now being imported. The 408 is typically Peugeot, with the sleek front view featuring the modernized low-lying grille, the familiar lion badge at the slanted edge of the bonnet and a pair of headlamps that taper at both ends. The 17-inch aluminium wheels add to the beauty of the car and gives it a sporty look.

To underscore the 'up-to-dateness' of the 408, the CD/radio sound system integrates MP 3, bluetooth hand-free, USB port, cooling glove box and an Isofix fitment for child seat. Both the Deputy Managing Director and the Kaduna Chambers President, as well as one of the leading Peugeot dealers, Chief Austin Okocha of A.C. Okocha Motors, took turns to harp on the need for patronage of made-in-Nigeria vehicles and the impact it would have on the local industry in terms of growth, development and employment.

Pena argued that PAN Nigeria has a lot of people as employees, while the technology it uses to produce cars 'is of high quality and respected around the world'. He therefore for support for its activities. On after-sales support Obi and John-Ekele assured that as always, availability of parts maintenance wont be a problem for the buyers of the new car, adding that already many technicians were undergoing necessary training preparatory to the arrival of the 408.