Laurent Gbagbo should be forced out militarily 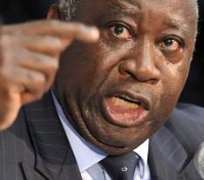 
With four demonstrators killed in Abidjan's Treichville district by forces linked to disputed President Laurent Gbagbo after a march to protest the killing of seven women demonstrators earlier, all indications point to the fact that disputed President Laurent Gbagbo and his group should be removed militarily as Cote d'Ivoire increasingly descend into turmoil.

Dr. Gbagbo, a documented tribalist and trouble-maker, refuses to yield power to his competitor Dr. Alassane Ouattara, whom he sees as not very Ivorian and who is internationally acknowledged as the winner of last year's presidential polls. Dr. Gbagbo is addicted to power. That's Africa's notorious Big Man syndrome at full throttle, pulling down Cote d'Ivoire.

Dr. Gbagbo's insubordination is no surprise to those who know him well. The Sierra Leonean academic and journalist, Dr. Lansana Gberie, currently a Senior Researcher at the Institute for Security studies (ISS), Addis Ababa, Ethiopia, who has covered African conflict areas including Cote d'Ivoire, told me of Dr. Gbagbo's insolence, “I happened to have been in Ivory Coast at the time of Gbagbo' very flawed election some eight or ten years ago. Everyone I spoke to at the time was convinced that Gbagbo was a mediocre and divisive character.”

For misusing his PHD as a destructive tool, despite all the rational and human devises available for him to explore for Cote d'Ivoire's peace, that has brought untold suffering to his country in a continent where unsuspecting Africans have huge mesmerizing view of their folks with big academic degrees, Dr. Gbagbo's PHD in History from Paris Diderot University can now go straight into the latrine pan, along with his other panic-stricken mendacity.

Like most Africans with high academic degrees but who have weak grasp of Africa and have helped bring Africa down, Dr. Gbagbo has consigned himself to the class of the Samuel Does and Idi Amins, thus joining the global–pariah clubs. Said Dr. Gberie of Dr. Gbagbo's twisted unAfrican mentality, “This was in other to counter the dominant narrative of the more populous and wealthy Baoule group, President Bogny's ethnic group... But I'm still slight shocked that he has turned to be such a horrible disaster. He was giving the chance to keep postponing and postponing the elections, stalling and stalling, and finally the elections take place.”

The Dr. Gbagbo case highlights the persistent dilemma of African elites place in Africa's development: despite their big university degrees, should Africans, often blinded by big university degrees, look at the mental health of their elites and leaders? Yes, we should, based on our political history. It is hard to imagine such thinking in Dr. Gbagbo's demolition of Cote d'Ivoire. This border on mindlessness. Some sort of gradual replication of Rwanda's genocide.

Decent African democrats should encourage the regional military to force out Dr. Gbagbo from Cote d'Ivoire to save it from further obliteration of African lives and property. Dr. Gbagbo should be ashamed, ostracized and excluded further civilized African communities; no more toleration of him given orders“to take control of all cocoa purchases and exports;” no more ordering that electricity should be cut off from the northern part of Cote d'Ivoire; no more entertaining him in respectful audiences; no more grinning photo-ops with African dignitaries; no more soliciting of his opinions by editors.

In most respects, Ecowas's decision to engage Dr. Gbagbo has turned out to be a disastrous bargain. Far from reasoning with Ivoirians and Africans to resolve the Ivoirian crisis, Dr. Gbagbo has used such engagements as cover to crush dissent, cause murders and plunge Cote d'Ivoire into further crisis. Whatever cooperation the international community established with Dr. Gbagbo has now been damaged irreparably. It's inconceivable that any African government and international institutions will have anything to do with Dr. Gbagbo.

Like Samuel Doe or Johnny Paul Koroma, Dr. Gbagbo has failed himself, Cote d'Ivoire and Africa. Like Paul Koroma's smouldering Sierra Leone, Africans cannot persuade Dr. Gbagbo to work constructively to end the Ivoirian political crisis. African has had too much patience with him and cannot watch him further burn down Cote d'Ivoire. While Africans believe in diplomacy, the African experience reveals that engaging dictators like Mobutu Sese Seko is hardly ever a winning proposition. As Dr. Gbagbo has revealed, the lowdown offends Africans moral and traditional sensibilities.

Africans cannot bet on unreasoning dictators like Dr. Gbagbo any more. The bet is on African people's freedoms and democratic rights. In the end, the biggest futility is not removing tyrants of Dr. Gbagbo's breed. The continued occupation of Dr. Gbagbo at the Presidential Palace in Abidjan represents instability not only to Cote D'Ivoire but the entire Africa. The failure of consistent diplomacy in bringing reason and humanity to Dr. Gbagbo's illegal attempts to cling to power at all cost, despite all indications saying he shouldn't, mean Africans and the international community should resort to military means to remove Dr. Gbagbo from Abidjan and bring order to Cote d'Ivoire.