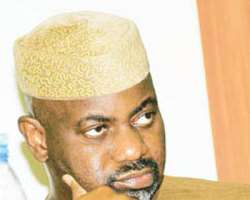 THE battle for the three senatorial seats of Cross River State has changed gear with the combatants throwing all the tricks in their armoury into the electioneering campaigns. Across the zones, each of the candidates is expected to put in his best to sail through victoriously.

Gov. Imoke
Deputy Senate Leader, Victor Ndoma-Egba of the Peoples Democratic Party, PDP, is going to face a fierce battle from Patrick Iwara of the Action Congress of Nigeria in the Cross River Central, while Prince Bassey Otu (PDP) will once again test his popularity agaisnt Prof. Eyo Etim-Nyong of the ACN.

CROSS RIVER NORTH
Professor Ben Ayade, PDP
He is the first consultant to undertake Groundwater Remediation in Nigeria, invention of solar energy based sewage treatment plant and the first ISO9002 certified Environmental consultant in the West. He overwhelmingly beat his opponents in the PDP primaries and seems to be the most popular candidate for the position of the Senate from the North. He is said to possess the financial muscle and structure to execute his campaign.

The initial problem he had was alleged arrogance on account of his material and academic wealth, which his opponents feared would him 'uncontrollable' if elected even if he shows absolute loyalty now. Besides, he is being looked at as the possible replacement for Governor Liyel Imoke in 2015 and those who are interested in the position may not want him to get to the Senate.

Chief Patrick Agbe, ACN
This is an Abuja based businessman. In the Cross River political circle, he is relatively unknown, but it was gathered that he had been the brain behind some of the money spent to keep the party together in the area. Much could not be said about him, but it seems he is going to face a great task to challenge the fire force of the PDP in the area although some of his associates say that he is equal to the task.

Chief Richard Ogbeche, ANPP
The young politician is not too popular in the local political scene. Not much has been heard of him and he is going to face a herculean task to contest against the PDP. The party for now does not have a formidable structure and nobody knows the magic he will perform to go to the nation's upper legislative chamber.

CROSS RIVER CENTRAL
Like the North, this zone is parading three leading candidates for the April elections.

Senator Victor Ndoma-Egba (SAN), PDP
Ndoma-Egba is presently the senator representing Cross River Central. He is the Deputy Senate leader and has served for two terms. He has good rapport with the state government and has remained a loyal party man.

Senator Ndoma-Egba is one of the vocal voices one could hear in the Senate and this makes the government of Cross River proud of him. He has the financial muscle to carry out his campaign.

However, his opponents said he had not given the zone quality representation with his home town Ikom, having one of the worst roads in the state. His critics wonder why he could not use his connection to cause the Federal Government to fixr the dilapidated Ikom-Ogoja-Katsina Ala Road.

Mr. Patrick Iwara, ACN
Iwara contested the primaries under the PDP and lost and thereafter defected to the ACN. There were claims that his constituents wanted him to emerge on PDP platform but the party's hierarchy preferred Senator Ndoma-Egba to him. His supporters boast that in a free and fair contest, he would win.

He comes from the same senatorial zone with the party's governorship candidate which is an added advantage. But it is feared that his new party does not have the structure to beat defeat the already structured PDP in the zone.

Mr. Gabriel Akibi Inyang, ANPP
Inyang is relatively unknown and nobody knows his political clouts. However, he has the backing of the ANPP national leadership. His supporters said he would surprise book makers at the end of the day. It is to be seen how this would be achieved.

CROSS RIVER SOUTH
This is the only zone with four candidates.
Prince Bassey Otu, PDP
He is a serving member of the House of Representatives representing, Calabar Municipal/Odukpani federal constituency. He is a flamboyant lawmaker that is loved by his people, given his philanthropism  He dislodged the serving senator, Bassey Ewa Henshaw in the party primary. He is presently, Chairman, House Committee on Petroleum Resources (upstream).

The initial hiccups he had was how to pick the ticket as there were interested groups in the primaries who never wanted him. Besides, he is going to face another heavy weight from the ACN, but going by his antecedents, he may weather the storm.

He is not new to the game. He has the financial muscle and intellectual capability, and is popular among the electorate.

But the professor seems not to have the structure for now that could match his opponent in the PDP. He contested the last governorship primaries in PDP and lost and even in some quarters in the state his bill boards when he was contesting the PDP primaries are still there.

Political analysts have accused him of not being stable in the pursuit of his ambition and do not follow up. He easily gives up and this may likely affect him at the polls.

The other candidates are Hon. Victor Okon (ANPP) and Terry Emu of the CPC. While ANPP is still considered weak in Cross River, Emu is said to bwe relatively new in the politics of Cross River State.

As the saying goes there is no harm in trial, but the truth is that this may not be the time for newcomers to wrestle power from the heavy weights.