TRAILER AND POSTERS OF GHETTO DREAMZ, THE BIOPIC ON DAGRIN 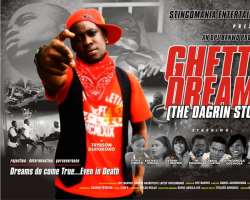 Stingomania, the producer of the biopic on late rapper Dagrin, released the official trailer of the movie this morning after director, Daniel Ademinokan concluded shooting of the movie around 2am. The accident scene where the rapper lost his life was the last scene to be shot; the emotional-laden scene was shot around Mushin and Oregun. Post production works will commence from next week in a bid to meet the April deadline set by Ope Banwo, the CEO of Stingomania.