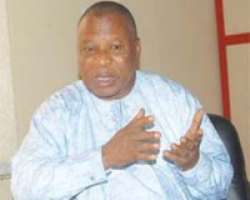 THE United States (U.S.) government has asked for a meeting this week with all Nigerian governors and federal legislators seeking re-election in next month general elections under the auspices of the U.S.-Nigeria Bi-National Commission (BNC).

According to the U.S. State Department sources, the American government is determined to impress it on the governors and federal legislators that their conduct in the April polls is being closely monitored in Washington DC and other leading western capitals around the world.

Confirming the meeting, Nigeria's Ambassador to the U.S., Prof. Ade Adefuye, said several Nigerian governors have already accepted the invitation to the meeting with the U.S. officials, which would be led by Under Secretary for Democracy and Global Affairs, Mario Otero, who is leading the U.S. delegation for the BNC's Transparency, Governance and Integrity (TGI) working group meeting in Nigeria this week.

Otero arrived in the country yesterday for the dialogue, which is expected to last till Thursday.

Meanwhile, worried by what it called 'frivolous injunctions' being granted by some judges, a civil society organisation, Coalition Against Corrupt Leaders (CACOL), yesterday cautioned the Judiciary against derailing the April general elections with such orders.

The coalition, which staged a protest in Abeokuta, the Ogun State capital yesterday against the development, insisted that the Judiciary had allowed itself to be 'manipulated by desperate politicians.'

The Independent National Electoral Commission (INEC) Chairman, Prof. Attahiru Jega, disclosed recently that there were about 150 injunctions brought by the political parties to the commission as a result of dispute arising from their primaries.

Adefuye in an interview before he travelled out of the U.S. for Abuja, Nigeria, confirmed that two sessions were being planned with the governors, apparently in two groups – one in Abuja and another in Minna. He said talks for a possible third group of the meeting with the governors in the South might also be scheduled.

Niger State Governor, Aliyu Babangida, has reportedly consented to hosting the U.S. government and Nigerian governors' meeting in Minna, which is expected to feature governors from the northern part of the country.

Some other governors are also reportedly willing to participate in the Abuja meetings of the BNC.

While the American delegation to the BNC meeting on the TGI working group is being led by Otero, a top aide of U.S. Secretary of State, Hillary Clinton, top officials on the Nigerian side to meet the U.S. delegation include the Secretary to the Government of the Federation, Yayale Ahmed, Foreign Affairs Minister, Odein Ajumogobia, Adefuye and other Foreign Affairs Ministry officials.

The Permanent Secretary in the Justice Ministry and its officials, Economic and Financial Crimes Commission (EFCC) as well as the Independent Corrupt Practices and other related offences Commission (ICPC) officials will also play active roles in the BNC meetings in Abuja.

The U.S. delegation and the BNC will also meet Jega and other top INEC officials, officials of leading political parties, civil society groups and other stakeholders in next month's elections in the country.

Adefuye said the BNC wanted to ensure that 'the elections go on smoothly.'

He added that the U.S. government and the BNC working group on the TGI was satisfied thus far with the progress of the party primaries and INEC registration exercise.

The U.S. delegation plans to charge the governors and the federal lawmakers to use their platform to protect the sanctity of the ballot and the electoral process before, during and after the polls.

An informed source said 'the U.S. government is inviting the governors and the federal lawmakers to the meeting and they will read the riot act that the international community will not accept any subversion of the April polls in the country.'

Ambassador Adefuye said the TGI working group meeting would be the last for the commission on the elections before they hold in April, and possibly until new elected officials are sworn into office on May 29.

Underscoring the importance of the TGI meeting, Adefuye stated that the U.S.-Nigeria commission would use it to secure the confidence and support of the governors and lawmakers to ensure proper political conducts during the elections.

Since the inauguration of the U.S.-Nigeria collaborative commission in April last year, top officials of both countries have been holding different meetings in Abuja and Washington DC on different areas covered by the BNC agreement.

Adeniran said the current situation in the judiciary could lead to a re-enactment of the June 12, 1993 presidential election crisis when late Justice Bassey Ikpeme of an Abuja High Court granted an injunction against the late Chief MKO Abiola's victory.

His words: 'When courts begin to grant frivolous injunctions, when they begin to delay unnecessarily and grant adjournment on nothing, they put people's lives and future in jeopardy through technicalities of the law. That is not acceptable'.

'If the Judiciary is allowed to be manipulated against the powerless by those who see themselves as the owners of power, might and influence, then the ordinary members of this country would be at greater risk to the extent that they would not be able to run to the Police, Legislature and Executive, and they would be left on their own.

'And we know if the kind of implosion that happened in Libya is allowed in Nigeria, the common man would be the one to suffer the greatest jeopardy. We don't want it to happen.'