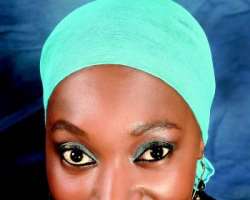 Funlola Aofiyebi-Raimi, an actress is the MD/CEO, Spice Communications as well as a TV and radio presenter. This fashionista and one of the divas in Tinsel, an international soap opera, is the producer and presenter of Touch of Spice, a radio program that has been on for 10 years. A winner of Celebrity Takes Two, a reality show on dancing, she tells Adaeze Amos that one fashion accessory she relishes with passion is the head scarf.

Can we step into your world?

I'm a creative Nigerian who hopes for a better country.

So how was growing up?

I grew up with five brothers, so I was nurtured into a tomboy in some ways. They did not want me to end up as a tomboy, they nurtured me to become a lady. You know, I don't know if it makes sense to you, but we would engage in rough play and I would have to argue my way out of everything and into anything I wanted. I make my point, but at the same time they would not allow me to get out of hand, and behave outside of this so-called mold of a lady that earns respect. I don't think you have to be with your long nails, and your long pony tail and pink bow and high stilettos, I don't think that is what it is like to be a lady. What it is to be a lady is just to carry yourself with respect. It's not having long nails and all those petty things, no! If you choose to look that way, that's entirely up to you. But you know, when you open your mouth to speak, ensure what you say makes sense. When you step into a gathering, earn respect, dress properly, it's as simple as that.

What is your style? Can you define it?

I just like a simple and comfortable look. I don't like ceremonies (laughs) if I can say that as regard fashion. I like African fabrics, and the creative ways our designers utilise the so-called local fabrics. For example, there was a time some people would not be seen in Ankara. But now, because of the way it is being put together, the way it is being designed, and presented, everyone has been on it and they look really good. I like head ties, carves, long skirts, comfortable shoes. I'm not into the six-inch heel shoes. I don't think I would be able to walk in them sincerely. But I can manage my three-inch heels on any occasion.

Oh, I like colours. I like to play with colours, things that match or blend. I know my body shape, so I know what suits me. I don't wear what somebody is wearing in a magazine just because they look good on them. I would think and ask myself, do I have the same shape, body structure to flaunt that kind of outfit? If the answer is no, then I would do away with it. I would admire it on someone else, but I won't really copy it.

You are not wearing lipstick, why?

Maybe for an evening outing, yeah, I could go for bolder colours. Where you are going should dictate how you dress. It would be funny if I walk in here for this interview wearing an evening dress and six-inch stiletto and long weave-on falling down my back, it would just be odd.

But you are a celebrity?

It doesn't matter. This is day time. I have been at work, working all day in my office. I had one or two meetings. It would be odd for me to be dressed in an evening outfit if it is during the day. I need to be comfortable and to be taken seriously by whoever it is that I'm coming across. Whenever I'm going out in the evening, there are nice, simple, comfortable ways to dress.

How did you develop passion for acting?

I was born to act, to be in the entertainment, to be on the TV and to be on radio. That is what I believe because I have loved it from when I was very young. I have been fascinated by showbiz from when I was very little. I used to be in front of the TV wondering how that is done and I told everybody in my family that 'watch I'm going to do that one day'. I knew this is my destiny from the word go. Which is probably why I have taken my career very seriously from the beginning. I don't joke with anything that carries my name or my face.

Yes I'm married. I got married in February two years ago. So what else do you want to know?

How did you meet, and what fascinated you about him?

Haa! Well all I can say is that we met on the job but we initially became friends and then eventually it developed into a romantic relationship and we ended up getting married. I had to fast-forward it for you (laughs).

What is the misconception people have about you?

Most people think I'm a snob. I do keep to myself. I'm a reserved person, I don't like trouble. I keep to myself. But it is not because I think I'm better than people, it's just because of the way I carry myself. Because I also play bitchy and nasty roles and they say I play them well, most people expect me to be that way. That is another major misconception. But it doesn't bother me because at the end of the day, when you meet and interact with me, then you see that I'm not like that.