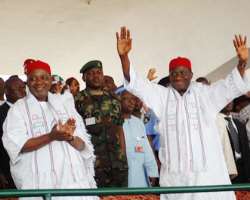 President Goodluck Jonathan took his campaign train to Anambra and Delta states yesterday, and declared that he has what it takes to turn Nigeria into the nucleus of a petro-chemical revolution in Africa.

He said Delta State in particular would be transformed and the much talked about Second Niger Bridge in Anambra State built within the next four years if voted into office.

Governor Emmanuel Uduaghan, at the Asaba rally, hugged former Federal Commissioner for Information and PDP leader, Chief Edwin Kiagbodo Clark, who has given him most trouble as governor of the state, and yelled his time-honored greeting, 'Gogorogo' three times when he addressed the mammoth crowd.

President Jonathan, who wore Delta North (Anioma) traditional dress with a red cap said the Federal Government would add value to its crude oil, rather than exporting it unprocessed, and also generate jobs for the unemployed youths.  Governor Uduaghan, Chief Anenih, Dr. Mohmmed and others adorned the same apparel.

He said he was happy that peace had returned to Delta State and urged the people to 'give us the next four years to witness development that you have never imagined'.

On the industrial sector, he said his overall plan was for Nigeria to become 'the nucleus of petro-chemical revolution in Africa', adding, that the government would not allow its youths to go in the search opportunities in other parts of the continent, and so, it has to prepare itself ahead of time.

He said it was such investments that would create jobs for the youths, pointing out that that was why the Ministry of Niger-Delta is emphasizing on skills training, where internationally recognized certificates would be acquired because the petroleum sector is a global industry and 'you must be well paid, you must be qualified, you must be certified internationally for you to work in that area'.

Clark apoligises
Also speaking, Ijaw leader, Chief Clark apologised to Nigerians for whatever statement he might have made in his role to get the President elected as PDP flagbearer.

He said 'I want to use this occasion to thank all Nigerians and to apologise to all others who felt being insulted, being hurt or aggrieved for the role we have been playing. On behalf of the people of the South-South I say, please, forgive us.'

Former national chairman of the party, Chief Anenih, in his speech noted that President Jonathan's visit early January  for a PDP rally ahead of the January 6 gubernatorial re-run helped in giving the party victory in the election and thanked Deltans for the support.

He said:  'I want to say that but for the President's visit, the strong rumour that was going round would have kept up in anxiety on the eve of the election. His presence put the doubting Thomases in check. Why I am here is to thank the people of Delta state for the respect they had and still have for the President and the vice president'.

Besides the unusual circumstances that catapulted Jonathan to power, Anenih said God had a reason for making him Nigeria's 'consensus candidate' and enjoined Deltans to do more than they did in January in the April elections, adding, 'this time, we expect 99.9 per cent of the total votes to be cast'.

On his remarks at Port-Harcourt that there was no vacancy in Aso Rock, he said he stood by his comments, pointing out that so far, he had not seen any presidential candidate campaigning as Jonathan was doing, touring the zones and states.

'Only the person who is right to be in Aso Villa is the one going from state to state, so that seat (presidential seat) cannot be vacant.'

Anenih noted, however, that other political parties were planning on how to challenge elections that have not been held, but, said, the PDP was waiting for them.

Also speaking, Governor Uduaghan commended President Jonathan for his support to him in the January 6 gubernatorial election, saying that the 1.9 million voters in the state would give their votes to Jonathan.

He, however, reminded the President that the state would strengthen its request for empowerment of Deltans after he had been sworn-in again just as he thanked him for the direction he had given the post-amnesty programme and non-militant youths.

Uduaghan drew the President's attention to the plight of Ndokwa nation, which is not enjoying electricity despite the presence of a Federal Government power plant at Okpai. He urged the Federal Government to direct the Agip oil company to step down electricity to the area for the benefit of the people and Deltans.

Vice President Sambo, Chief Clark and acting national chairman of the PDP, Dr. Mohammed described President Jonathan as a viable candidate that would change the face of the country and urged the people to vote for him.

I will build 2nd Niger bridge
And at the Awka rally in Anambra State, President Jonathan promised that all federal roads and the 2nd Niger Bridge in the area would be completed within four years if voted into power in the April election.

Besides, the President said within four years in office he would tackle the erosion problem in the South East.

He said the federal government was committed to creating an enabling environment for industry and commerce to thrive in the state, saying that they (FG) were working hand in hand with the APGA controlled government of Mr Peter Obi to achieve the goal.

He said: 'We are working with the APGA government, one of the strong parties in Nigeria and the first party to endorse me. We shall work with you to ensure that good governance which you have been giving to the people of Anambra is sustained'

Speaking earlier, the national chairman of APGA, Umeh said the party endorsed the President because of his acceptability by majority of Nigerians that he be given the mandate to rule the country.

The President's visit to Anambra State provided a rallying point for the factions of the PDP which have been at each other's throat for some time.