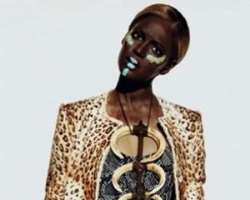 Just like her husband, Jay Z who proudly invested so much into the Fela on the Broadway project, Africa-American star, Beyonce Knowles has also honoured Afro beat king, Fela Anikulapo Kuti in the 'spirit' of glamour and 'Africanness'.

Beyonce is featured on the cover of L'officiel magazine march edition looking darker and pumping the attire of a complete African woman. It would be recalled that Jayz, actor Will smith and his wife Jada Pinkett-Smith reportedly invested about $1 million USD into the News York production of Fela on the Broadway.

This is a great touch and most people are proud that International stars are keeping alive the memories of Fela, the great music legend who fought against looting of funds by public office holders and their associates. Fela arrested and beaten several times for daring to speak against misrule and injustice. His house was burnt and his mother died as a result of one of the invasions of soldiers to his home in 1978. Fela Died in 1997 and his son, Femi has taken over from where he stopped. Though many believe that Femi is less outspoken compared to his father, he has built a multimillion Naira New Afrikan Shrine where thousands of Afro beat lovers go. Fela's sister, Yeni Kuti is the Chief Executive of Felabration, an annual week to celebrate the remembrance of Fela.