Akunyili pledges to be a positive influence in the Senate 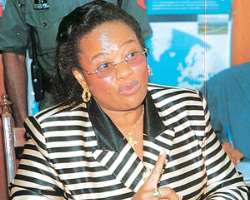 Dora Akunyili
Immediate past Minister of Information and Communications, Prof. Dora Akunyili, has pledged to be a positive influence in the Senate if elected by the people of Anambra Central Senatorial District in the April 2, 2011 polls.

She made the pledge while reacting to the news of her selection as one of Nigeria's ten most influential women.

“I am humbled by this rather significant honour and see it as a call to further service to the Nigerian nation,” Akunyili said Monday in a statement issued by her Special Assistant on Media, Mr. Isaac Umunna.

“I promise to be a positive influence in the Senate if it pleases Almighty God and the good people of Anambra Central to give me their mandate to represent them in the Senate during the forthcoming elections. I will not only give the people the best possible representation but also serve as a role model to my colleagues in the Senate,” added Akunyili, a frontline senatorial candidate of the All Progressives Grand Alliance (APGA).

Akunyili, who resigned as minister on December 15 to enter the senatorial race, had on Thursday been named as one of Nigeria's ten most influential women by Business Hallmark , a Lagos-based weekly newspaper. She was named alongside First Lady, Dame Patience Jonathan; Petroleum Minister, Mrs. Diezani Alison-Madueke; and Mrs. Farida Waziri, Chairman of the Economic and Financial Crimes Commission (EFCC).

Also on the list are Mrs. Amina Zubairu, Special Assistant to the President on the Millennium Development Goals; and Hajiya Bola Shagaya, a socialite and one of Nigeria's most successful businesswomen.


Unfolding the list in Lagos, Business Hallmark Publisher , Prince Emeka Obasi, said Akunyili and the others being so honoured emerged after months of research and deliberation. He vouched for the authenticity and integrity of the list, disclosing that the names passed through a rigorous screening exercise and standards adopted by Business Hallmark .

Akunyili, also a former Director General of the National Agency for Food and Drug Administration and Control (NAFDAC), has received over 500 awards and recognitions locally and internationally.