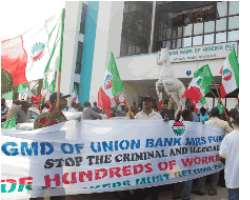 Association of Senior Staff of Banks, Insurance and Financial Institutions (ASSBIFI), a Nigeria Labour Congress (NLC) affiliate, has declared that Trade Union Congress (TUC) position on the crisis with the management of Union Bank was never a threat, even as it accuses the Group Managing Director Mrs Funke Osibodu, of anti-labour practices.

Deputy President of the union, Comrade Amina Danesy told Workforce that the union was least bothered on several instructions given to ASSBIFI, TUC by the labour centre to capitalize on the situation and move in to unionise the bank.

'We are not bothered by all the statements credited to TUC, neither can they be a threat to us, they are only looking for an opportunity to capitalize on,' she said.

Comrade Danesy, who is also vying for the post of ex-officio in the forthcoming NLC election, said ASSBIFI as a body, belonged to UBA and Union Bank as the two initiated the formation of the senior financial association years back. She stated that nobody has any legal right to decide on the matters, be it TUC, Union Bank or the Minister of Labour and Employment as the case is currently in court.

She noted further that the Managing Director of Union Bank, Mrs Funke Osibodu, took the decision of de-recognising the union, merely because of her anti-labour disposition. 'All she is doing is because she is anti-labour, she has no business with ASSBIFI, but UBASS which is an in house union. 'Besides, by her action she has meddled into an intra-union crisis, which is already a case for litigation at Industrial Arbitration Panel. Her action, no doubt, has been a surprise to many people,' she said.

The ASSBIFI Deputy President said that the management of Union Bank had no choice but to recall all the staff dismissed and allow things to go back to the status quo. 'The Union Bank Group Managing Director has no legal right to decide on the intra union crisis issue, that amounts to contempt of court. Besides, the bank has an agreement with the NLC which Osibodu has now contravened by her action,' Danesy expressed.

She wondered why the management of Union Bank has found it difficult to relate amiably with the union, stressing that UBA management has been quite supportive to the inhouse union.

'When I informed the management about my ambition to contest for an elective post in the NLC, they were quite happy and ready to give me all the necessary support towards realising the goal,' she said. She explained further that she was spurred to contest in the NLC election not because women were few, but for the fact that she has the qualification.

'I believe in qualification and not hiding under the carpet of gender and that is my advice to other women, we should be bold enough to take our place in the society. 'The position is not about sex, but about capacity. Women are very powerful and intelligent being,' she said. She added that women underrate themselves when they shout about given them 35 per cent place in the society.

'I am also contesting to give ASSBIFI a place in the NLC executives, which until now we have not had and likewise make our bank workers know that to be in union is good and rewarding,' she said.