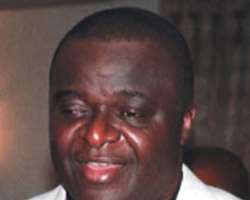 The stage is set for fight of the titans in Anambra Central Senatorial zone as Senator Annie Okonkwo flags off his campaign for a second tenure in the Senate on the platform of the Accord Party (AP) on Wednesday.

Okonkwo, who was denied ticket in the Peoples Democratic Party (PDP) after his name was severally published as the winner of the primaries in the zone, last week joined his colleagues at the National Assembly, Senator Ikechukwu Obiorah of Anambra South Senatorial zone, CID Maduabum of Nnewi North, Nnewi South and Ekwusigo Federal Constituency and Emma Uchieze of Awka North and South Federal Constituency in AP to contest in the forthcoming election.

Already, the zone had been heated up with the entry of former governor of the state and Action Congress of Nigeria (ACN) state leader, Dr. Chris Ngige last week into the senatorial race, where former minister of Information and Communications, Prof. Dora Akunyili and former House of Representatives for Awka North and South, Chudi Offodile were flying the flags of All Progressives Grand Alliance (APGA) and Peoples Democratic Party (PDP) respectively.

Speaking to newsmen at the rally, Uchieze said it would hold on Wednesday at the Alex Ekwueme Square, Awka and would have in attendance Senator Obiorah, Maduabum and many chieftains of the party including the supporters of the candidates who would be decamping from PDP, ACN and other political parties to AP.

Uchieze, who also explained why he left PDP assured that AP would spring surprises in the state in the April general elections, adding that candidates of the party would be given the party's flags during the rally. His defection to AP from PDP he said was not only because of the crisis that engulfed the party in Anambra State but also because of the insistence of his constituents that he should contest for a second term in office.