NIGERIANS ARE NOT TIRED…WHY REVOLT? 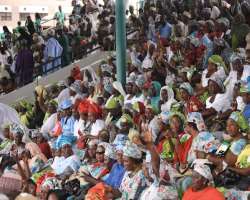 SOME FEMALE POLITICIANS AT THE PRESIDENTIAL DECLARATION OF FORMER MILITARY DICTATOR, GENERAL IBRAHIM BADAMASI BABANGIDA AT THE EAGLE SQUARE IN ABUJA.
Listen to article

“Any revolution has a price and Egyptians today feel that they will go for that price if the end result is total freedom and respect for human rights, and that they take charge of their own lives. The people want to bring down the regime. It is not them (protesters) causing this (economic) damage. The damage is caused by (an) irresponsible ruling gang. By the way, dignity and human rights have no price,” said Sadek.

This is the same Egypt where Christians are providing defence for Muslims and vice versa. I will not claim to be an expert in Egyptian politics or start crying more than the bereaved in a case that is in far away Cairo.

Cairo is almost the second largest economy in Africa, with electricity, water, good schools, Medicare and some basic infrastructure. Although this same Egypt has its fair share of problems, its bad roads, poor people, unorganized political and stealing class, but it is nowhere compared to our beloved Nigeria.

So I leave Cairo, after all, Mubarak has been pushed out and lets dwell in Nigeria. We are a people today that are not perturbed by the growing level of disaffection in the land.

Why revolt, a system in which an Appeal court judge rejects promotion to the Supreme Court, a sitting president calls Governors of a section of the country rascals and several persons are killed in stampede because of poor and inadequate security arrangement cannot be tired.

How can we be tired when Jega's INEC has continued from Iwu's era, only this time with a level of finesse...names appear, disappear, reappear and then removed?

The nation has nothing to revolt for because a sizable number of the populace believes that Jonathan will perform, that all he needs is to be elected. As if he is merely a labour prefect now rather than the head boy.

We are not tired of killing ourselves while an unconfirmed Muslim radical called Buhari, and an alleged 'penterascal' named Bakare combine to give us the Nigerian BB (Blackberry).How do we revolt now when we have Buhari, Ribadu and Jonathan all paying visits to god of men, my apologies I meant men of God.

Revolutions are on the premise of a driving philosophy, a mission, and a vision that is dependent on a believe that change is eminent and possible. However today sees Nigeria and Nigerians on a praecipe, with a motto best described as 'we will survive', we shall overcome and most especially either plainly funny or just naive 'God is a Nigerian'.

If there was a revolution today what would be the key issue or issues. Would it be fair to the Ijaw nation that sees it as their turn to share the largesse, at least according to Obasanjo at the PDP Presidential Campaign launch in Ibadan he stated in reference to his kinsmen “O si n be, bawo ni o se fe mo bi won se pin (You were not there, how do you expect to know how they shared the largesse).”

According to data provided by Achilleus-Chud Uchegbu "Within this eight year cycle, a senator is expected to have sat in the upper chamber for a total of 1,665 days. But Araraume sat for only 650 days and was absent for a total of 1,140 days.” Yet Ararume like others, no one is tired of such extinguished characters with nothing but a dishonourable and unquenchable hunger and thirst for the nation's public funds.

We are just fixated on the Nigerian myth that we are resilient and have shock absorbers with a lifetime warranty. We are not in any way tired of democracy practiced as government of husband and wife, for children by father with family at the expense of all.

We are not tired of government by bore-hole, democracy of buying motorbikes rather than providing employment or an enabling environment for self-employment to thrive. We are contented with government by donation, when its your turn, your state is given a federal parastatal, a feel of federal power, even if it means a Federal college of forestry in a desert in Maidugiri, or a National Spare Parts College in Ilorin.

Why revolt now that the Niger Delta is about to enjoy or has started to enjoy the largesse, N45Billion naira master plan project, federal university in the President's village, airport and even more on the way.

How do you revolt in a system where the more you steal, the less likelihood of being punished. For every one billion minus ten years in your jail term, go ask Ibru, Bode George, Balogun, Alams, Dariye and co.

Nigerians are not tired, they are happy to read the newspapers on a free reader’s basis, and request someone to check their mail because internet facility is still a luxury. We are content with a vast majority operating call centres, vendors, motorbike riders, akara sellers not by choice but circumstance.

We are content clinging to our idiosyncrasies of religion, ethnicity, indigeneship and the likes, when the world is moving ahead. We forget that good food, sound health system, working education, motorable roads are not a function of either religion or creed but hardwork and sacrifice from a leadership and populace beaming with purpose, desire and willing to ask for it.

We are too afraid to be tired. You write, you maybe arrested, you criticize: you family attacked and we live in silence and encourage ourselves with songs from the "Nigerian Circumstantial Hymn Book" such as 'God Dey', 'E go better', 'How man For Do', 'My Turn go come', 'God go punish dem', 'It is well' and the likes.

Every constructive drive that ordinarily would take us from the position of self-deceitful contentment is viewed, analysed and taken to the laboratory to be checked for ethnic, zoning, religious and corrupt molecules. If Christians are to benefit, Muslims will scream, if the sultan is involved...hey you dont know these people o, they want to Islamize Nigeria, (As if it is by the press of a button).

A man on top recently said to me, "PCD be careful, we still need you o, and these are not the times to die for Nigeria".

I will end the same way I started...“Any revolution has a price and Egyptians today feel that they will go for that price if the end result is total freedom and respect for human rights, and that they take charge of their own lives..." Nigerians feel otherwise, why look for something you did not loose.

Is it any surprise that we are treated with disdain...we are what we are by our consent, it’s no surprise, as one lays his/her bed so he/she lies on it, however it is instructive that today's Nigeria does not even provide one with a bed to lay.

Lets watch as our collective mentality is continually abused, after all the Ibos say when a man wakes is his morning, we can start the journey to a new Nigeria now or when we wake...the choice is ours.