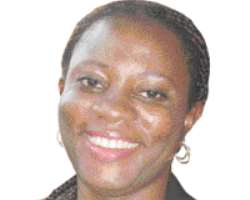 Last week, Fumni Idowu told the heart-rending story of how her husband, Seye Idowu abandoned her and their two children after getting to the United States. After settling down, he divorced her without her knowledge and then re-married.

The couple met when Seye, a journalist, worked at the Guardian newspaper, where Funmi was also working as a graphic artist, in the early 90's. In that interview, Idowu recounted how they met: 'He just walked up to my office and asked for my name. I guess he got information about me from a friend of his that was once a staff of the newspaper, John Olubo.

He met John in London and told him he knew a lady who had no boyfriend and was homely. When he told me about John, I was excited, and after sometime, he said I should start planning to spend the rest of my life with him. It was so funny to me, I shouted in the arts studio and told my colleagues, 'come and see my designer husband', but he didn't give up. He started coming regularly and I told him I was not in search of a boyfriend; I told him I was ripe for marriage. He reminded me that he told me the first day that we would spend the rest of our lives together. That was how we became friends.'

After sometime, Seye and Funmi exchanged visits to each other's families. Following these visits, the two families asked the lovebirds to fix a date for their wedding. The couple got married on December 4, 1993. After the birth of their first son, Seye moved to over to ThisDay newspaper, where he eventually became the deputy editor and was sent abroad to cover a story in conjunction with Time magazine. He left Nigeria on September 26, 1997. Then, Idowu was about three months pregnant with their second baby. Thirteen years after, as Funmi revealed, Seye had not come back, practically abandoning her and their children.

Ever since the story was published, there has been a surfeit of reactions by incensed Nigerians, both at home and overseas, including Mrs. Stella Ukegbu, a legal practitioner and campaigner for enforcement of the human rights of people unduly incarcerated in prison as awaiting trial cases.

Q: What remedy is available to her now?
It depends on the type of marriage they had - whether it was a traditional marriage under native law and custom. In that case, Yoruba culture allows a man to have more than one wife. In Lagos, even if you want to have a Christian wedding, most churches will ask you to go and formalize your marriage in court - that way you are covered both ways - in court and church.

This therefore becomes a marital union contracted legally. In this case the Matrimonial Causes Act covers this marriage and therefore provides this woman a way out to sue the man for child support. So if they actually did that, and they have now lived apart for 13 years, then that's one of the grounds for divorce. If the man has made up his mind to divorce the woman, for reasons best known to him, and conforms with the procedure for divorce, you can't force him to live with her, given that they have been apart for 13 years.

Now if the man did not put her on notice, then the woman can go to court and sue for damages because it is quite clear that she cannot take care of the children alone. She can sue the man and claim for maintenance of the children. The man is alive and financially fit to support his children. Why should he leave the woman all on her own to cater for the children?

If she said she doesn't want the divorce, the fact is that you can't force marriage on the man. They have lived apart for 13 years. The remedy available to her is to claim maintenance for the children. The court will look at the issues and grant her maintenance.

The woman also said that the husband divorced her without her knowledge and consent. In that case, did the man commit any offence? And if so, what can the woman do?

The man committed an offence - that is if the man actually has a divorce paper obtained without her consent, without putting on her notice. Except if she was served and she decided not to reply or contest the divorce. That means the divorce suit was undefended. No matter what, the divorce suit would still go through the process of trial because the procedure under the Matrimonial Causes Act is different from civil or criminal cases.

So if she was put on notice and she didn't feel like contesting the divorce, the man would still go through the process of trial during which he would give evidence and the court will ask him questions. Mind you that my remarks are premised on the fact that the divorce suit was filed in Lagos, where there is a specialized division that deals with matrimonial cases. So if the man filed his petition in Lagos, the law requires him to serve the woman.

The law stipulates that you must find out where the defendant (in this case the woman) is residing; if she fails to receive the notice, you can go back to court to request for substituted service - by either publishing the notice in a newspaper or pasting it on the wall at the last known address of the woman. In other words, you must make every reasonable effort to put her on notice.

Though the respondent/defendant may not want to reply - particularly if she feels that the embarrassment of the divorce is too much for her. In most cases, respondents do not reply. In such situations, the court would not strike out the suit just because the respondent did not reply. Rather, the court would still listen to the plaintiff/complainant (that is the person seeking a divorce) and allow the person to give evidence in support of the request for divorce, and then judgement will be given. That is the procedure.

But whatever the man did over there, I have this very strong feeling that fraud was involved. The man may have contracted somebody to find a way to get fake documents for him, which he then filed in a United States court as divorce paper. So if he did that, and I repeat if, then it is a criminal offence. The woman should also look at this angle, to find out whether the man forged a divorce certificate. And if he did, that is a criminal offence - beyond and above the damages she could sue for and claim from him for maintenance of the children.

If it is established that the man filed a forged divorce paper purportedly issued by a Lagos court, would you advice the woman to pursue this matter with the United States Embassy?

Absolutely. That is a course of action open to the woman. If, and I repeat if, the man forged the divorce papers then the best thing is to notify the United States government through the embassy in Lagos. They also have legal procedure, which they follow religiously. And the man knows the implications of presenting fake papers to a US court.

But the woman cannot do that without doing her own deep investigation to be sure that everything she is saying is real and provable. So she has to take her time and make sure that she has real proof which will make her case solid - not anyhow evidence. If she has facts, she should contact a lawyer who will now follow it up. It has to be a lawyer that has experience in handling matrimonial cases.But I think the bottom line is that she must verify the facts and have proof of her claims. The United States is not an anyhow county.

The laws are straightforward. If she is very sure that the divorce certificate the man presented was forged, then automatically it will be a problem for that man. He will be in big trouble. Because I don't think the US government will support such corruption. They value family ties a lot. If you claim you have a family tie, there is no way on your own you can decide to break it, without following due process.

Now, let's look at a scenario: there are cases where a young couple wins the US visa lottery and then one half of the couple, most often the man, goes first to the United States to get established with the understanding that after doing so, he will arrange for the wife to join him in the US. Would you encourage wives to still allow their husbands to go overseas, given the experience of Funmi Idowu?

The truth is that this thing depends on the individuals involved. Some people are very transparent, and they have conscience. If they win visa lottery and are married, if the man is sincere the US government will definitely give the woman visa. If the man has followed the process required of him to bring his wife over to the US, and they are truly a family the woman would get visa. One thing I know is that the US encourages family ties. What I have realized is that most of these men who go over to the US without their wives after getting the visa lottery are not sincere. They get tied up with a woman over there.

Would you say that the man had a hidden agenda right from the beginning, which he didn't disclose to the woman?

Definitely, he had a plan to stay back in the United States, but did not let his wife into that plan.

How would you describe him in one sentence?
I think he is a very wicked, insincere man with a cold soul. How could he do a thing like that to that woman? He is just heartless. Pure and simple!