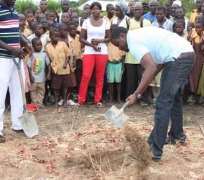 High profile Actor, John Dumelo is spearheading an effort in building better schools for the less privileged children in the rural areas of Ghana. On Febuary 3rd, 2011, the Actor chose to celebrate his Birthday with the students of Baayire Primary & Junior Secondary School.

The surprise visit by John Dumelo brought some festive cheer to the community. His arrival was received with loud screams and a warm welcome reception at the School. He made generous donations of basic School supplies and, Refreshments for everyone.

The A-list actor was given a tour and, briefing by the Principal on the immediate needs of the School. He pledged the donation of 5 (Five) Classroom buildings estimated at $40,000 USD. Mr.Dumelo's Charity, The Amara Foundation will Finance and Build the project.

At the Ground breaking ceremony, Mr.Dumelo stated that the initiative was the first of many to come. He remarked that his choice for Baayire was because he identified the community as being one of the most deprived Villages in the Upper West Region of Ghana. "I stand for quality Education. “ He said. "I would not have made it this far without the Education I received and, I believe that all children deserve an opportunity to maximize their full potential" He added.

In response, the Principal, on behalf of the entire staff thanked the Actor for his kind gesture towards the School and community. He remarked that the occasion was the first of its kind and assured that the Children would be provided with quality education.

Each year, The Amara Foundation will choose a village out of the Ten Regions in Ghana and, determine ways to improve their Educational infrastructure