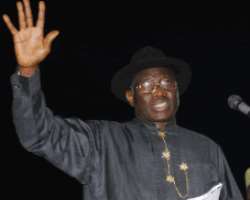 The  Peoples Democratic Party (PDP)  yesterday released the list of the Presidential  Campaign Council (PCC), a week after President Jonathan  had concluded  zonal presidential campaigns. The list has the former Director-General of the Jonathan/Sambo campaign organisation which operated from Plateau House as the Director-General  of the council.

The council, which is to be inaugurated today,  will operate from Legacy House. The list also revealed a harmonisation of members of the Plateau House, which handled the campaign outfit of President Goodluck Jonathan, while he was a presidential aspirant and national officers of the party to douse the cold war between those who led  President Jonathan's campaign team  and national officers of the party at Wadata Plaza, the PDP national secretariat.

In  fulfilment of his pledge to accommodate members of his rivals, former vice-president, Alhaji Atiku Abubakar, Kwara State Governor, Dr. Bukola Saraki and former military president, General Ibrahim Babangida,  the party  will today inaugurate the PCC with pro-Atiku and Saraki's men as members.

Saraki was one of the four presidential aspirants screened by the Northern Political Leaders Forum, (NPLF) before the Mallam Adamu Ciroma  Committee of wise men picked Alhaji Atiku Abubakar, as its anointed candidate.

According to the list of members of the PCC Governor Saraki is the chairman of the Reconciliation Committee with pro-Atiku campaigner and former Senate President, Ken Nnamani, as member.  The former Senate President was initially with former military president, Ibrahim Babangida and moved to the Atiku team, after  the latter's emergence.

The Director General of the Atiku Campaign Organisation and chairman of DAAR Communications, Chief Raymond Alegho Dokpesi, is a member of the PCC Publicity Committee and will wear a second cap as one of the resource persons for the presidential campaign.

The wife of Adamu Ciroma, leader of the NPLF, Inna, is also a member of the reconciliation committee, which also had the former governor of Ondo State, Dr. Segun Agagu, and former minister of information, Prof. Jerry Gana.  Others in the committee are Alhaji Bamanga Tukur, Alabo Graham Douglas, Senator Ladan Shunni and Ambassador Aminu Wali.

Former chairman of PDP Board of Trustees (BoT), Chief Tony Anenih, will serve the PCC as campaign adviser while former national secretary of PDP, Chief Ojo Maduekwe, is secretary of the PCC. The six zones will be co-ordinated by serving governors that did same job for Jonathan before the January 13 national convention.

Senate President, David Mark; Speaker of the House of Representatives, Dimeji Bankole; Deputy Senate President, Ike Ekwerenmadu, and the Deputy Speaker, Usman  Nafada,   are all expected to co-ordinate the National Assembly for the presidential campaign.

The former Inspector-General of Police, Mike Okiro, will head the security committee while oil magnate, Oba Otudeko, is the chairman of the finance and fund raising committee.  The inter-party relations committee that will handle affairs concerning political parties that adopted President Jonathan as their flag bearer has Chief Ebenezer Babatope as the chairman.