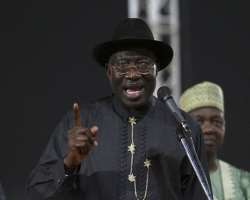 A statement from the President’s spokesman, Mr. Ima Niboro said Jonathan has already sent heartfelt condolences to the families of the victims.

“The postponement of the event is to honour the victims of the tragic incident.

“The president, who has already sent heartfelt condolences to the families of victims of a stampede at the venue, is deeply saddened,” Niboro said.

So far, 12 persons including a PDP Women Leader, Caroline Enyinda, have been reported dead while about 29 other persons were seriously wounded in the stampede, which occurred after a policeman shot sporadically into the air at the Presidential rally sending crowds scampering out of the venue.

The Inspector General of Police in a statement said it has opened investigations to identify the officer that caused the chaos.