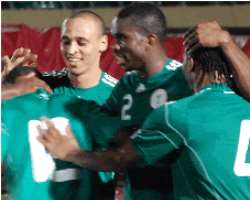 Super Eagles in celebration mood
Super Eagles' Head Coach, Samson Siasia, has developed goose pimples over the uncoordinated defence of his team during a friendly international against Sierra Leone on Wednesday at the Teslim Balogun Stadium in Lagos.

The Under-23's former coach is worried about the way Eagles defence suddenly collapsed in the dying minutes of the duel to give the Leone Stars their only goal in the match that ended in 2-1 victory for Nigeria.

'Siasia is not impressed with the defence at all. He didn't know why they had to concede to the visitors like that,' a football official told Daily SunSports. The coach plans to put everything in proper perspectives when the team files out again for the proposed US President Cup later this month in America.

'It's good the Eagles played the friendly match and the coach has seen some areas he would work on to get a perfect team,'he added. The visitors found space behind substitute Adefemi Olubayo and ripped a shot past Aiyenugba. The goal, however, attracted boos from the Lagos crowd. In overall review, Siasia gave kudos to his team for playing their hearts out despite the short -time preparations.

Taye Taiwo's first half penalty and Ekigho Ehiosun's toe-poke in the second had the Eagles flying, but their spirits were deflated by a late Sierra Leone's goal two minutes from time. Siasia has spent the weeks, since his appointment, promising attacking football, and on that score he delivered. Every chance the Eagles got, they attacked the Leone Stars down the wide areas. Ahmed Musa, who broke the Nigerian domestic league goal scoring record last term, proved particularly troublesome down the right channel with his pace and guile.

Peter Utaka was not quite as effective on the other flank, but he is a central striker.

The visitors got the first opportunity barely three minutes into thhe match when Mohammed Bangoura's cross- cum-shot forced Dele Ayenugba into a fingertip safe. But from then on, it was Nigeria.

His day was ended when he collided with an opponent in midfield and had to be stretchered off. It was his replacement, domestic league top scorer, Ekigho Ehiosun, who doubled Nigeria's advantage.