PDP BEGS DANIEL NOT TO DECAMP 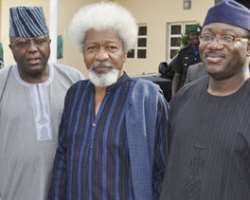 By KOLADE OLAREWAJU
ABEOKUTA - PLANS by Governor Gbenga Daniel of Ogun State to decamp from the Peoples Democratic Party, PDP, were put on hold, yesterday, after he was offered a political solution out of the crisis that uprooted his loyalists from the party's candidates' list for the April elections.

PDP's legendary Mr. Fix It, and erstwhile Chairman of the Party's Board of Trustees, BOT, Chief Tony Anenih, who led the presidential delegation to Daniel said the Governor remained a PDP member and that he remained a pillar and leader of the party.

Governor Daniel's standing in the party was equally firmed up by the ruling of a High Court in Abeokuta, which upheld his faction of the party as having the authentic state executive of the PDP.

Fadairo exco elected for four years
The ruling by an Abeokuta High Court presided over by Justice Adetokunbo Jibodu, affirmed that the process by the PDP to remove or dissolve the Joju Fadairo executive linked to Governor Daniel was null as the executive was elected to serve for four years.

He then declared the harmonization of the Ogun State PDP unconstitutional, null and void.

The judgment was, immediately, lampooned as inconsequential by Chief Tunji Olurin, the gubernatorial flag bearer of the party opposed by Daniel.

The Presidential delegation that met with Daniel, yesterday, comprised Anenih, the National Secretary of the Party, Usman Baraje; and the Chief of Staff to President Goodluck Jonathan; Chief Mike Oghiadome.

Speaking after the three-hour meeting, Anenih said: 'I am a member of the PDP Board of Trustees. I am here to see a PDP Governor. The Ogun State Governor is one of the pillars and leaders of the party. PDP has a way of resolving problems and will resolve this one.'

Daniel clad in a white Buba and Sokoto with a red cap was upbeat with the Presidential delegation, an indication that a political solution to the crisis could be in the offing.

Vanguard learnt that Daniel was supposed to decamp to the Peoples Party of Nigeria, PPN, where many of his loyalists had already taken positions prior to the deadline given by the Independent National Electoral Commission, INEC, for the filing of nominations for the elections.

Delivering judgment on the suit filed by the Daniel faction, Justice Adetokunbo said the process by the PDP to remove or dissolve the Joju Fadairo executive was null as they were elected to serve for four years.

He then declared the harmonization of the Ogun State PDP unconstitutional, null and void.

Apparently ecstatic about the judgment, members of the party trooped to the Secretariat on Kobape Road singing victory songs while the Chairman, Chief Joju Fadairo, at a press conference immediately after said it was now clear that 'justice delayed can never be justice denied.'

Reacting to the judgment yesterday, Olurin, speaking through his campaign organisation described the purported court judgment as a 'mere desperate exercise of no consequence whatsoever.'

The statement signed by Otunba Gbenga Adesanya said: 'We received with great amusement the news of the purported court judgment obtained by the Gbenga Daniel/Joju Fadairo group. Our initial reaction was to ignore it. But we decide to respond so as not to allow the dissidents mislead the general public and our teeming supporters.

The National Working Committee, NWC, of the party is yet to reverse its dissolution of the former Joju Fadairo-led exco. The national leadership of the party on Tuesday confirmed its position when it gave our candidates flags to fly the party's ticket in the April elections. The Federal High Court in Lagos has also restrained the dissolved Joju-Fadairo led exco from parading themselves as officers of the party and from conducting primaries/congresses. They had told the whole world that they were leaving our party. Pray, why do they want to cause more confusion before their exit?

'We make haste to refer them to the advice of the INEC National Commissioner in charge of Legal Affairs, Mr. Phillip Umeadi (Jnr), that in the face of a court order restraining a body or an individual from taking some steps, efforts should be made to either vacate the order or get a superior court to reverse it and not by going to a junior court or a court of co-ordinate jurisdiction.

'We are not in any way distracted as we are in the process of inaugurating the Campaign Committee for the task ahead of restoring our lost glory and returning our dear state to its place of pride.'