SALES OF NSUKKA HILLS PITCH COMMUNITIES AGAINST ONE ANOTHER 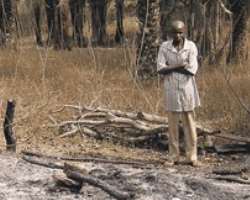 On the foot of the ubiquitous hill on the outskirts of Nsukka Urban, sprawls Alor-Uno, a thinly populated rural community in Nsukka Local Government Area Enugu State. Recently, the police in Nsukka stumbled on a strange find while quelling a clash between some members of the community who attempted to sell a hill inhabited by some adventurous villagers since 1982.

The sale of hills is now the order of the day in Nsukka and one costs a fortune.? an attempt to force the natives inhabiting the hill allegedly set the area on fire, thereby causing grave damage to houses, economic crops and farmland belonging to the hill inhabitants. Consequently, the hill dwellers petitioned the Divisional Police Officer, Mr. Jacob Muri to come to their aid.

The petitioner in the petition dated January 18, 2011 claimed that a group of their kinsmen had on January 18, at about 9:00a.m caused arson, malicious damage and threat to property and their lives.

The cat was let out of the bag when Muri led a team of his men to the community on receiving a distress call that the alleged arsonists had barricaded the road armed with dangerous weapons and charms preparatory to invade the hill dwellers and force them out of the hill to pave way for its immediate sale.

Daily Sun gathered that the police overpowered them and they retreated to the Obunetiti area of the troubled community where the shrine of the dreaded Adoro goddess is situated.

The police chased them into the shrine and arrested a dozen youths and recovered a large quantity of assorted types of charms, and offensive weapons.

According to an eyewitness account, it was in the cause of this expedition that the police discovered a 'bush bar' where a notorious hemp dealer lives and carries on the illicit business day and night.

'He commands a good patronage,' said a villager pleading anonymity, adding that car owners and important personalities park their cars few meters to the bush bar as the road was deliberately made inaccessible to the bush-bar to avoid police sudden invasion.

Daily Sun also gathered that the land speculators had earlier succeeded in selling one of the hills at a whooping sum of N5 million and shared the proceeds among themselves.

According to the Divisional Police Officer, he had earlier received a petition from some villagers alleging that their property were set ablaze including economic trees, farmland, houses even as their lives were being threatened.

'I immediately went to the traditional ruler of the community, Igwe Nwaeze to tell him about the petition, to seek a way to avoid a possible reprisal and breakdown of law and order.

'I urged him to convene immediately meeting of his cabinet peacefully. I was surprised to receive a report on January 18, 2011 that the alleged arsonists had barricaded the road armed with offensive weapons, including machetes and charms and were advancing to attack the petitioners. I decided to lead the operation to open the highway myself. When we arrived at the scene, we removed the barricade and chased the suspects to the shrine of a goddess where they took refuge, thinking we would not enter there to make arrest.

But we dared the goddess and arrested 12 suspects while others escaped. I was surprised to see a well furnished house right inside the jungle and I was latter told that the owner who uses it for the sale of Indian hemp had escaped. Twelve of them are in our custody helping us in our investigation.'

Corroborating what the DPO said, Igwe Ngwunwa Eze, the traditional ruler of Alor Uno frowned at the action of the suspects and queried, 'does one person own a hill?' adding that 'The hill in question is a communal property owned by Alor Uno people. Since ages nobody has owned hills. Hill is older than man; it will remain while man goes away.'

He confirmed that the hill settlers were genuinely allocated land on the hill since 1982 and that any Alor Uno indigene was entitled to live on the hill.

He vehemently condemned the attitude of the suspects and called on the police to ensure that they paid for their crime.

The Councillor of Alor Uno, Hon. Obiora Ezeora said it was strange that few people planned to sell what belongs to the people.

He warned that the local government would not fold its hand to watch a few individual heating up the polity and assured that the law will catch up with those causing trouble in the state.

The town union President, Chukwu Dike said he was not aware of what was going on initially 'because we were running around to assist INEC officials in the registration exercise.

'We met at the Igwe's palace and agreed to hold a meeting with other stakeholders in the town, but before we would meet those interested in the sale of our hill struck.

'They barricaded the road. The area where the bush-bar was, where Indian hemp is sold is secluded from the community. The area is known as Obunetiti, so I am not aware that such a thing exists. Those barricading the road and setting fire on people's property and economic trees are the ones finding trouble. One person does not own a hill. I heard that they have sold one hill standing between Alor Uno and Isiuja. We praise the police for preventing blood-shed and let the law take its course.'