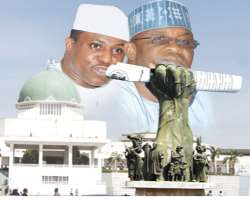 SAN FRANCISCO, Feb 08, (THEWILL) – The National Assembly inserted a clause in the Electoral Act that has rendered the Independent National Electoral Commission (INEC) incapable of enforcing internal democracy in political parties. In other words, it would be unconstitutional for INEC to reject any candidate presented to it by political parties irrespective of how the candidate is selected, INEC’s Resident Electoral Commissioner for Cross River State, Mr. Mike Igini has said.

The REC raised the alarm in Abuja during a briefing with reporters on Monday.

The section in question is Section 87 (9) of the old Electoral Act that says: ‘Where a political party fails to comply with the provisions of this Act in the conduct of its primaries, its candidate for election shall not be included in the election for the particular position in issue.”

He said the commission had just found out that the National Assembly deleted the section and replaced it with a new clause aimed towards ‘castrating INEC’ and making it ineffective, when INEC asked federal lawmakers to amend the Electoral Act in December to enable it have more time to prepare for the conduct of the April election.

In a two-page speech titled: “Amended Electoral Act 2010: The Death Of Section 87 (9) And The Interment Of Internal Party Democracy”, Igini, who was a former Student Union leader at the University of Benin said: “In public policy making, lawmakers must see their sacrosanct roles as statesmen and women who must make laws that are applicable for all times and not for the narrow elitist interest of a few. These facts need to be brought before the public domain so that the general public which reposes much trust on INEC, must know that on the matter of remedies for deviations in party internal democracy INEC has been completely emasculated by law makers.

“It is noteworthy that as an electoral management body, INEC has been working under legal uncertainty as the Electoral Act was undergoing amendment being the guiding statute for conducting electoral processes. However, having perused within the last 24 hours the gazette copy of the Electoral Act 2010 of December 29th as amended it has become clear that the dictatorship intent in elitism has triumphed over the overarching pluralism that Nigerian people clamour for, in matters of internal democracy.

“To be clear, Section 87 (9) of the preceding Electoral Act 2010 clearly underscored the inherent ability of INEC as a Commission to arbiter timeously on contentious party nominations which do not follow stated party guidelines by specifying in Section 87 (9) of the old Electoral Act that: ‘Where a political party fails to comply with the provisions of this Act in the conduct of its primaries, its candidate for election shall not be included in the election for the particular position in issue.

“Whereas, in the amended Electoral Act 2010, this provision has been expunged by the lawmakers; more significantly, to nail the coffin of Section 87 (9), the lawmakers introduced a new provision to Section 31 (1) which completely strips INEC of any say in the matter of disqualification of nominees submitted by political parties. This new provision states that: ‘Every political party shall not later than 60 days before the date appointed for a general election under the provisions of this Bill, submit to the commission in the prescribed forms, the list of candidates the party proposes to sponsor at the elections, provided that the Commission shall not reject or disqualify candidates for any reason whatsoever.


“By using this blanket phrase ‘any reason whatsoever’, the law makers have stripped INEC, the supposed umpire, of the ability to determine the qualification or status of any candidate submitted by a party, irrespective of any circumstances surrounding a candidate’s status, the party now dictates, how, who and why a candidate can contest in an election in which they are participating, even if INEC has doubts it must seek legal interpretation in a court, has no timeline and cannot stop a party’s candidate from taking part in an election conducted by INEC.

“This is akin to a referee being asked to play the role of a spectator regarding who participates in an election. This development can only spell doom for internal democracy of parties which, as we all know, has been the primogeniture crisis for much of the conflict that has been bedevilled development of parties and therefore the development of a sustainable democratic culture in our country, because an open elitist field only selects candidates who have in most cases not gone through proper party democratic approbation, as we are currently witnessing in the crises within most parties,” Igini said.

“When such candidates pass through their parties through such imposition, they also hope to go through the main elections by violent or forceful means, any wonder why we have to constantly manage politicians who want to win at all cost at great cost to the public finances?” He asked.

“Sadder still, is the fact that this rape on the democratic process was enabled by law makers many of whom are now victims because over 50% of them are unlikely to return and have become casualties of the undermining of the pluralist controls which were inherent on INEC and the courts and which has been stripped without any time frames for remedial actions by section 31(1) and 87(10) of the new Electoral Act 2010,” Igini further stated.