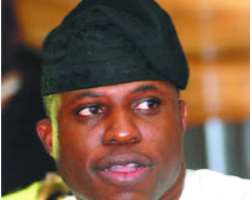 
Shock and disbelief trailed the release of candidates' list for Ogun State yesterday, as the names of the Speaker of the House of Representatives, Hon. Dimeji Bankole, Governor Gbenga Daniel and Mrs. Lola Abiola-Edewor were not on the Peoples Democratic Party's list released by  the  Independent National Electoral Commission (INEC) in Abeokutal.

The former managing director of the Gateway Holdings, Mr. Gboyega Nasir Isiaka, candidate of the Gbenga Daniel faction of the PDP was dropped for former military governor of old Oyo State, General Adetunji Olurin who was backed by ex-president Olusegun Obasanjo as the party's standard bearer.

Olurin's running mate according to the list released at about 5.24 p.m. by the state Resident Electoral Commissioner (REC), Mr. Martins Okunfolami was the former chairman of Ijebu-East Local Government Area of the State, Mr. 'Tunde Oladunjoye.

The daughter of former President Olusegun Obasanjo, Senator Iyabo Obasanjo-Bello was on the list as  senatorial candidate for Ogun Central as against the name Hon. Lola Abiola-Edewor who belongs to Daniel's camp.

According to the (REC), Mr. Peter Alawode and not the Speaker of the House of Representatives, Hon. Bankole is the PDP candidate for the Abeokuta South Federal Constituency in the April elections.

Mohammed Adetunji Odunowo's name appeared as against the name of Governor Gbenga Daniel as the senatorial candidate of the PDP in Ogun East.

Some members of the state House of Assembly also had their names as candidates in the  Obasanjo camp.  They include, Akintan Job,  for Yewa North. Mr. Babatunde Fadun, Ogun West Senatorial District as against the Daniel faction's favoured candidate, Mr. Waliu Taiwo.

The governorship candidate of the Action Congress of Nigeria (ACN) in the state, according to the list, is Senator Ibikunle Amosun with the former commissioner for works in the state, Prince Segun Adesegun as his running mate.

Former deputy governor in the state, Alhaji Adegbenga Sefiu Kaka is the senatorial candidate of the (ACN) in Ogun East.  Mr. Olumide Osoba, the son of former governor, Aremo Olusegun Osoba was among the ACN candidates for the House of Representatives election. He is to represent the Abeokuta North, Odeda and Obafemi Owode Federal Constituency.

A member of the Daniel camp, Mr. Oginni Olaposi Sunday, while reacting to the list, said the joy of the Obasanjo faction would not last.

Oginni who is also the National Coordinator of the Yoruba Youth Congress (YYC), said: 'Although I am not a prophet, but I can tell you that the joy of Obasanjo's camp will not last.  It is a temporary joy, which I am sure will not last at the end of the day. Definitely, this is not the last to be heard on the list of who will represent the state on the platform of the PDP.